Fragment From The Annals of The Last Godslayer

. . . And it did come to pass that in its final moments, the Burning God did see its time run out, like sand passing through open fingers.

The triumphant arrow, let out by The Last Godslayer, Killer of Fire, did strike through the incandescence, plunging deep within. Its mighty barb did pierce the other side.

As it bled, the God did shed tears of fire and let out howls of ash. It was to no avail, there would be no mercy.

In its last halting gasp of life, the Raging Inferno did spit out a curse upon The Last Godslayer, that she may know "Peace and Prosperity" in the Darkness she had wrought. . . 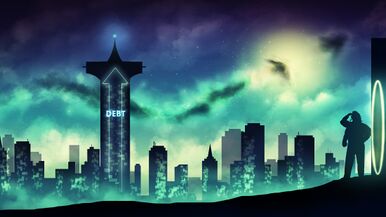 The skyline of Dark Seattle, by @_erisiar

Dark Seattle is the Mirror World counterpart to the city of Seattle. It is accessible by destroying the Seattle Gum Wall and venturing into the portal behind it, as discovered by former garage player Farrell Seagull in Season 4. It is unclear if there are any other gateways to the city beyond this, though rumors suggest it. Venturing into Dark Seattle is highly discouraged.

Dark Seattle, while similar to Prime Seattle, has significant differences that set it apart from ours. The most notable factor is its eternal daytime. Glancing at this never setting sun reveals the city’s next difference, a gigantic arrow pierced into a now dead star, hanging in the sky. There is also the overbearing presence of The Corporation, a company that seems to control the city along with the blaseball team, the Dark Seattle Corporates.

(Note: While it is easier to get to Dark Seattle if one is a part of the Shadows, Dark Seattle is not where shadowed Garages retreat to. See the Seattle Shadows Co-op for more information on shadowed garages.)

The Fall of a City and Birth of a Corporation

Not much is known about when exactly the following events took place, given the temporal anomaly surrounding Dark Seattle. All historians have is data gleaned from personal reports by Goodwin Morin and Farrell Seagull. Attempts to venture into the city to get information has been thwarted by Alaynabella Hollywood, who has taken to acting as a guard for the gate.

The Death of Gods

In the time before Day X, Goodwin Morin and her guild of god slayers were hired by a corporation known as Jamazon to assist in taking down the gods of Dark Seattle. Morin and her guild succeeded, Morin driving the spear through the sun herself, pinning the corpse of the dead sun in the sky for all to see. After this, Jamazon began their slow but steady acquisition of the city. It is rumored that the power of the now dead sun aided them in their efforts, but reports are inconclusive as to how. Morin and the rest of the godslayers were locked away in company cubicles, forced to watch their supposed allies in Seattle's liberation instead bring the city under new management.

The Dark Seattle Garages rebelled against the takeover, staging grand riots and protests, however they could not fight back for long. Additional anecdotal evidence suggests that Jamazon, displeased at the ineffectiveness of the riot police, decided to draft in additional support by "Restructuring" forces who had been deemed to be underperforming with the aim of demoralizing and terrifying any remaining resistance in the zone around the Big Garage. Reports vary, but agree that incidents after this point became notably more savage and bloody. Beaten down and knowing they would not last, the team holed themselves up in their stadium, establishing a safe zone for themselves. This was not to last, as the company began piping in a strange frequency that caused all that heard it to fall in line. To combat the frequency, the band played without rest, working in shifts in a showdown that came to be known as The Last Gig. They sang until their voices gave out, they played until their fingers bled, but one by one they fell. No known recordings of The Last Gig exist.

It is rumored that one of the band's own betrayed the others, allowing the company to use them to worm the frequency into the stadium's audio system, but reports are conflicting, perhaps intentionally.

After this, Jamazon rebranded itself to The Corporation, and the re-aligned Garages became The Dark Seattle Corporates.

During one of the postseasons, The Corporates were granted Synergy Blood, in a move by management to “Expand the Brand.” Synergy Blood grants the team a 25% increase to defense during Feedback weather, in addition to making the effects of feedback 50% less. This often results in only one team member being swapped to the Corporates, or in some cases an alternate is made and sent over instead. From documents retrieved from Dark Seattle and what limited encounters have been recorded, Synergy Blood has an additional effect of connecting each of the team members with each other, allowing them to feel each other's thoughts and emotions. A sample recovered from Dark Seattle revealed that it is possibly cyan in color, but further research found the sample to be artificially synthesized, leading to doubts as to the exact nature of Synergy Blood.

Near the end of Season 10, the Seattle Garages were duped into funding what they believed to be a blessing for their team, when in actuality it was a scam to fund a blessing for the Dark Seattle Corporates. The Garages staged a grand heist to take their funds back, and in the process ended up becoming a part of an internal uprising, during which Goodwin Morin escaped.

Ever since Morin's escape from Dark Seattle, various stores around the Seattle area have been found selling a mysterious new soda, called Rise and Shine. Sources have been lead to believe that these drinks are coming from Dark Seattle, as those that imbibe it find themselves drawn to the Gum Wall, an attraction no Seattle local would visit voluntarily. Malik Destiny has been kicked out of Pikes Place Market on a number of occasions for liberating cases of the soda, saying he needs to keep people safe from its influences. It is unclear where the soda is originating or if there are other portals to Dark Seattle, as neither Lori Boston or Alaynabella Hollywood have seen anyone come through the Gum Wall gate.

The cans are a simple light blue with a picture of the sun being pierced with a blue arrow. Text on the front reads: “Rise and Shine: be a better You, for Us.” In small letters under the ingredients, it reads “May contain 1% of sun blood.”

Trivia and Rumors about Dark Seattle

This information has been reported by shadowed team member, Lori Boston, who claims to venture into Dark Seattle on weekends to DJ.