Raúl Leal was a lineup player for the Miami Dale, and was with the team from Season β1 until being incinerated on Season β13, Day 43.

Leal joined the ILB as a lineup player for the Miami Dale with the Return of Blaseball.

On Season β3, Day 26, Leal swallowed a peanut and had an allergic reaction, resulting in a combined 8.7 -> 4.7 stat decrease.

At the end of Season β7, Leal received The Iffey Jr. after Dale won the blessing of the same name. This reduced all of Leal's stats to 0, but gave them the Fire Protector modification. This allows Leal to protect all of their teammates from incineration. 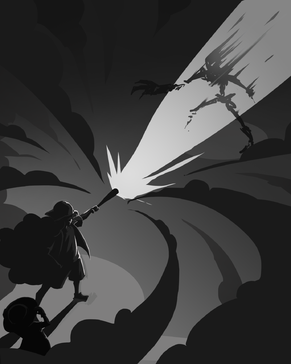 Leal Redirects an Incineration, by @AliceJooren

On Season β8, Day 94, a rogue umpire attempted to incinerate fellow Dale hitter Beck Whitney, who was fireproof due to Leal holding the Iffey Jr. The attack was redirected back to the umpire, who was incinerated in the first known instance of an umpire death since the start of Internet League Blaseball.

During the Season β9 election, the Miami Dale won the New Kid blessing and a rogue umpire attempted to incinerate their least Idolized player, Don Elliott. However, Leal prevented the incineration due to the Iffey Jr. and a second rogue umpire was killed.

On Season β13, Day 43, Leal was incinerated and replaced by Riley Firewall.

Raúl Leal is known to be a highly compressed sine sound wave given physical form. Leal was created accidentally by DJ/Part-time scientist Melvin Ochoa of Fort Lauderdale, Florida, in his experiments attempting to create a bass sample loud enough to pop a Dom Perignon bottle at 15 meters of distance on impact. The results were the complete destruction of the bottle, back wall of Ochoa's house, and creation of Leal, who reportedly developed a high affinity for blaseball in the following days.

Leal's self-declared favorite music genres are trap music, Miami bass, and dubstep, although he has admitted to a slight interest in folk music.

Given Leal's extensive exposure to fellow Dale player Peanut Bong without any ill effects, foul play has not been ruled out as the source of Leal's "allergy."

Acquiring both electric blood from the Dale's Closed Circuit Blessing and the Iffey Jr. in Season 7 has had a chaotic effect on Leal. Now too amped up to take physical form without constant concentration, Leal typically arcs around the field at incredible speed, presenting fans and players alike with a high-powered music and light show. While described by Dale fans as "absolute fire" and "super dope," this has also made Leal all but useless at batting, fielding, or essentially anything to do with actually playing the game.

Leal remains important to the team, however. Because of his blistering speed, Leal is able to warp in front of any attempt to incinerate a Dale player, drawing that energy into the Iffey Jr. and converting it into sick bass drops, airhorn spams, or special lighting effects. On one notable occasion, Leal created a giant hologram of a middle finger, belived to be both a message to any who oppose the Dale, and a tribute to fellow player Cannonball Sports. These effects have, on at least one occasion, proven powerful enough to incinerate the attacker. These special talents have earned Leal the nicknames "Miami Sound Machine" and "The Sound Barrier" from fans.

Leal was among the first players to be swept Elsewhere by Immateria, disappearing during Season β12, Game 76 against the LA Unlimited Tacos. Search efforts were undertaken by the team and fans alike, particularly via a poster campaign shared throughout the league. Leal was found unharmed a few days later.

The relief was unfortunately short-lived. On Season β13, Day 43, Leal was targeted by a rogue umpire and incinerated, to the shock of the entire league. Scrutiny of the properties of the Iffey Jr. revealed that this loophole in the item’s Fireproof protection had always existed; that is, that the bat allowed Leal to protect his teammates, but not himself.

Accounts vary as to the details of the events following the incineration, but Leal was replaced on the roster by ILB newcomer Riley Firewall. Many sources relate Firewall’s recruitment to Leal’s death specifically, attributing personal or professional motive to Firewall’s impassioned, if allegedly heated, demeanor. Firewall has since spent a great deal of time (including the entire Offseason between Season β15 and Season β16) Elsewhere, having been swept away by Immateria twice. It is unknown whether their relationship to Leal, whatever it may be, has to do with a seemingly shared susceptibility to flooding.

The ILB, via Intern-Interim Defector Commissioner Parker MacMillan IIIII, confirmed Leal’s death[1] in what was widely called “one of his least offensive incineration announcements to date.” MacMillan IIIII later added that “In light of Raúl [Leal]’s storied career, the Iffey Jr. has been deemed Historically Significant and will be Preserved.”[2]

Leal’s obituary was published in multiple Miami newspapers and even picked up by national outlet Celebrities Deaths[3]. A memorial service was held on March 20, XX21 at the First Underwater Methodist Church of Miami’s Terrestrially Accessible Annex. Many of Leal’s surviving teammates spoke in remembrance, notably Don Elliott and Beck Whitney, who both survived incineration attempts thanks to Leal. Whitney would announce her departure from the Dale to great controversy less than two seasons later and, while the exact reasons were never publicly shared, speculation was rampant that Whitney was struggling in the wake of Leal’s death. Attempts to confirm or deny this were met with Whitney’s typical breezy demeanor, but a source close to her said she had taken to saying that she “need[ed] a vacation from this vacation.”