From Blaseball Wiki
New Player
This player was recently called up to the ILB. If you would like to write lore, please put it on the Talk page for community discussion.

Valentine Games III is a lineup player in the Vault, and has been there since the end of Season 22. Games III has played for the Kansas City Breath Mints.

Games III joined the ILB as a lineup player for the Kansas City Breath Mints during the Season 20 Latesiesta via the Gift Shop. At the end of the Season, Games III faded to Dust and returned to the Vault.

No rumors found in the Rumor Registry; this IRM may be incorrectly installed. Visit Help:Interdimensional Rumor Mill Guide for details on IRM installation and troubleshooting. 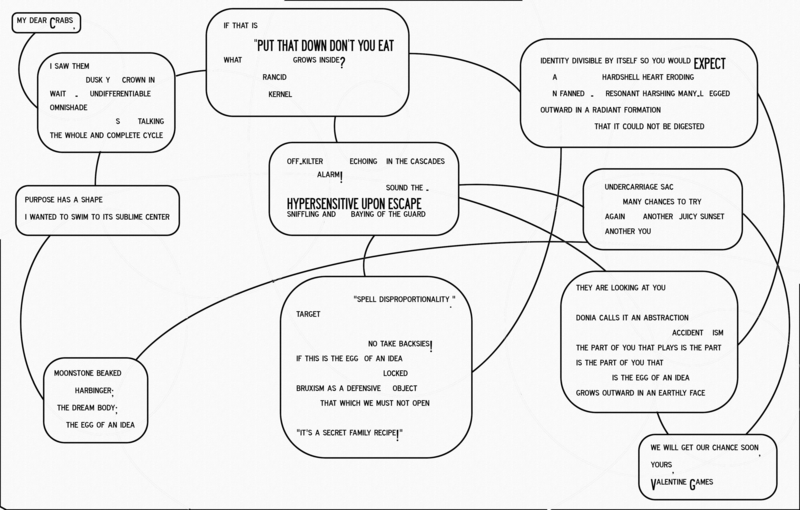 (To read all the poems, click here. Refresh to get another one.)

Valentine Games joined the ILB as a member of the Baltimore Crabs, but fate had other plans for this charming wanderer.

Though Games has a nomadic heart, his devotion to the Crabs is one of the few constants in his life. The relationship is more than pure team loyalty. Games, an accomplished poet, believes in the inherent divinity of the natural world — and in a universe whose arc points towards the eventual carcinization of all living beings. Their clothes are often encrusted with ocean salt — a strange occurrence, given that not all the teams they've called home have been near the sea. Still, communing with nature, transcribing its messages, and seeking the greater mysteries of the world and Blaseball are core to their life, no matter what town they call home for the moment.

Time with the Houston Spies

Because Games has an interest in life's greater mysteries, spending some time with the Houston Spies was a natural choice. During a Feedback event during Game 51 of Season Six, Games, at that time with the New York Millennials, swapped places with then-Spies hitter Andrew Solis. The swap was mutually beneficial; Games gained access to the Spies' extensive collection of dossiers and information-gathering technology and Solis began his relationship with Dominic Marijuana prior to his incineration.

Games's time with the Spies was met with great enthusiasm. Her trademark "Valentine Triples" and solid defense helped the Spies become quite a formidable team during Season Eight. Off the Blaseball diamond, Games's natural curiosity also made them a prized spy. His dedication to seeking answers for the great mysteries of the world made them a natural choice for spywork, as well as their ability to redact documents to great poetic effect. Games also showed a distinct capability to find the strange, esoteric truth at the heart of things, opening up more mysteries for the Spies to explore as often as she turned up concrete evidence.

However, Games's deeper eccentricities were sometimes at odds with their spying ability. They had a tendency to speculate aloud, and would routinely walk away from assignments to pursue whatever whim the wind brought them.

Regardless of their performance as a spy, Games rapidly became the face of the Spies. His batting ability, effortless style, and unique personality made them a perfect fit for the spotlight — she became "The Spy of Love," the trenchcoat-clad wanderer with a artist's heart. The Spies' propaganda division encouraged Games to lean hard into this identity, including asking him to kiss the bat before each hit. Games was willing to play her part, earning the affection of numerous fans in the Spies as well as other teams. During interviews, Games often suggested their acceptance that Blaseball was where they belonged. She is quoted as saying, "Well... this is what I have to do. I go where the wind takes me, and the wind takes me to new places pretty frequently, so. I'm a spy now, in some sense."

But Games's wandering soul couldn't be content with just one team. Eager to investigate the strange phenomenon of the Flickering then-Unlimited Tacos player NaN, the Spies arranged a swap to make use of NaN's Flickering and the Feedback weather of Season 9, Day 6. Games volunteered to take NaN's place; Los Angeli was an interesting phenomenon, one she'd like to see for herself, and the sea called to him once again.

Though Games has left the Spies, his presence is still felt—blackout poetry adorns the walls of Spies HQ, Comfort Septemberish has taken up collage art from advertisements, and Math Velazquez has devised Math's own form of poetry with graphing calculators and sine waves.

Time with the Unlimited Tacos

Upon arrival in the rifts of Los Angeli following the Feedback swap, reports have come back fuzzy, with all firsthand accounts varying and surveillance camera footage completely glitching.

Because of this, little has been uncovered about Games post-Feedback to the Tacos. He has furthered this by denying to make any comment on his personal relationships with teammates, although, from her recently published blackout poetry, it appears she is beginning to grow fond of the team’s sense of family, and has begun to slowly reveal parts of their life in regards to previous travels.