AlternateThis Player is an Alternate...
Player is replaced with an alternate reality version, stats are randomized.
ScatteredThis Player returned from Elsewhere a bit Scattered.

Math Velazquez is a player in the Shadows for the LA Unlimited Tacos, and has been with the team since the Season 23 elections. Velazquez has previously played for the Houston Spies.

Velazquez joined the ILB as a pitcher for the Houston Spies with the Return of Blaseball.

On Season 9, Day 52, Velazquez became a lineup player due to Reverb.

During the Coffee Cup, Velazquez played for Royal PoS as a lineup player.

During the Season 20 elections, Velazquez retreated to the Spies' Shadows as a result of the Spies' Move will, resulting in a combined 7.4 -> 9 stat increase.

On Season 21, Day 80, Velazquez joined the Spies' lineup in exchange for Yeong-Ho Garcia at An Undisclosed Location via the Ratified Voicemail.

On Season 23, Day 62, the Worldwide Field Thieves' Guild stole Velazquez from the Houston Spies and gave them to the Miami Dale. Velazquez was traded to the LA Unlimited Tacos' Shadows with no replacement during the Season 23 elections via the Gachapon blessing.

Math Velazquez became one of the first non-human entities to play blaseball when Velazquez began career pitching for the Houston Spies in season 1.

Velazquez is especially popular with Houston high schoolers, who, upon the realization that Velazquez was exceptionally good at math, have taken to throwing their homework at Velazquez during the seventh-inning stretch. Such papers are instantly tossed back with all the answers filled in. After becoming aware of this practice, a group of high school math teachers tried to pressure the Spies into banning Velazquez from doing the homework that is thrown at Velazquez. These efforts proved fruitless—speaking on Velazquez’s behalf, Fitzgerald Blackburn told the press that “banning Math from doing math is like banning the Spies from [REDACTED]. It’s just not natural.” Regional mathematicians have attempted to exploit this by throwing unsolved mathematical problems. In all cases except for [REDACTED], this has resulted in Velazquez throwing back the problem statement along with “I have found a truly marvellous proof of this fact, which the margins of these papers are not large enough to contain.”

Velazquez does not accept the usage of any pronoun to refer to Velazquez. When asked why this was, Velazquez returned a paper with "

In the Interdimensional Rumor Mill’s library, there’s an always-evolving book titled Math Velazquez’s Rumor Registry. A bookmark sticks out from between the pages, labelled IF-1.618 and marking the following entry...

Velazquez's origin, like so much relating to the Houston Spies, is ultimately a mystery. The prevailing hypotheses hold that Velazquez is a metaphysical construct created by a secret, forbidden sect of mathematicians for some unknown purpose, a normal human forced into this present form after a disastrous attempt to divide by zero, or the universe attempting to experience itself.

Some Spies fans have postulated that Velazquez began playing Blaseball since Velazquez's previous outreach effort to convince the general public to appreciate the mathematical discipline, coolmathgames.com, was removed from the Internet—or possibly since Blaseball's geometric fields, many statistics, and parabolic curves appeal to Velazquez's sensibilities. Velazquez has also been observed trying to convince everyone's son, Son Scotch, to enter a stable and profitable career in mathematics.

Conjecture as to the original Velazquez's true motives is necessary since, according to intel from an indeterminate inside source, no one on the Houston Spies was good enough at math to decipher what Velazquez wants to say. Unfortunately, this meant that in order to communicate, Velazquez usually had to individually graph each word that they want to say on a TI-84 calculator, a process that was laborious at best.

This linguistic [citation needed] barrier is likely the reason why the Spies have always had a problem with optimizing their team lineup; after asking Velazquez about the subject in hopes of finding a mathematically perfect optimization, the output was so confusing that players were rumored to resort to measures such as charades and the 'hot and cold' game to find a lineup they could actually use. The Spies eventually decided to put Velazquez's talents at obfuscation to use, assigning Velazquez to run the Hungarian numbers station that serves as the team's official form of communication.

After spending several seasons learning Blojban, reading computer assembly code, and acquiring a custom keyboard with a button layout identical to that of the TI-84, Velazquez began to use the increased memory and automation capabilities of computers to communicate more efficiently. Velazquez's missives remained brief and cryptic, but became significantly more readable, and some of them were even in a language the Spies could comprehend. 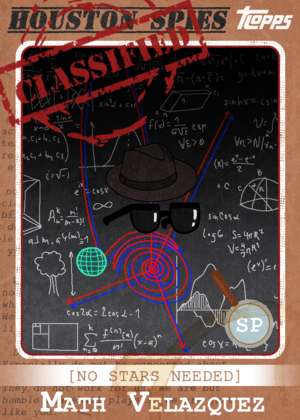 During early seasons of Blaseball, Math Velazquez consulted with several eminent mathematicians in the hopes of developing an experimental algorithm which would allow Velazquez to become the first Blaseball player with a negative star rating. It was unknown how Velazquez intended to achieve this, why Velazquez considered this outcome desirable, and what impact it would have on Blaseball as a whole.

Velazquez published academic papers theorising that achieving negative values could be a first step towards opening Blaseball up to ever more esoteric mathematics—vectors, infinite series, and perhaps even beyond that into complex numbers, tensors, higher dimensions, and more. It remains unknown why Velazquez considered this outcome desirable, and opposing scholars warned that success in this project could critically destabilise Blaseball. This was because Velazquez appears as patterns in everything, and is therefore, for all practical purposes, omnipresent. Though "Math is Math," as both mathematicians and Houston Spies fans are wont to chant, swapping one variant for another could potentially have had far-reaching, undetectable consequences we cannot begin to fathom.

Velazquez was often credited with being the reason for the Spies' often unpredictable performance, as Velazquez was a wild and experimental pitcher. Velazquez's pitches often involved complex algorithms unfathomable to other players, resulting in as many thrown balls as strikes and hits. One theory proposes that Velazquez's attempts to reach a negative star value was also an attempt to research new and bizarre pitching forms, though this rumor has been staunchly denied by the Houston Spies.

Prior to Season 4, Velazquez was spotted spending a lot of time with Spies colleague Fitzgerald Blackburn. When pressed, Velazquez said that Blackburn is a doctor in all the ways that count, xe was helping Math achieve a negative star rating and any relationship between the two is nobody's business.

According to heavily redacted documents left by Velazquez before the departure, both Fitzgerald Blackburn and then-Spy Collins Melon aided in an experiment intended to help Velazquez become the first player in ILB history to boast a negative star rating. How Velazquez achieved the swap is a mystery, but the experiment swapped both Velazquez and Melon for beings who were, to all appearances, the exact same as their previous selves but with new skills.

After the decree finalizing the Alternation was ratified at the end of Season 4, Spies fans were shocked and dismayed to discover that Velazquez had been replaced. Neither Velazquez nor the Houston Spies organization have ever made an official statement regarding what precisely happened when making the dimension swap with Old Math, but an anonymous investigative journalist for The Blaseball Chimes released a short—albeit dramatised—article, the first of its kind that the Spies had ever allowed to be published:

Math had stated that they had been feeling strange throughout the fourth season. Most of The Spies chalked this up to their overall wins declining; an imbalance in the numbers, some had said. But something wasn't adding up. Math had pitched against the odds in the past, but this season, it was like the percentages had been flipped on their heads. Math pushed Mathself in every game despite Math's clear discomfort. Math was spending more time with Son playing catch, and even gifted Son Math's gold-plated protractor; the same one Math had used the past 3+ seasons to predict opposing hits and calculate Math's own precise, baffling pitches. Blackburn was given Math's TI-84, the most expensive piece of computing technology Math could think of. Melon was pulled aside and spoken to, but as of yet has not commented on what Math told them. Donia Bailey was given a hug, the first she claims she's ever received.

After the Spies were put into party time, Math was nowhere to be found except during games. While festivities were held, Math was alone. Surprisingly, new Spies member Morrow was the first to comment that "something wasn't adding up" with Math, but was generally shot down with phrases from the team such as, "Math is Math," and "The numbers don't lie."

Then the postseason came, and the Tigers won the fourth season, and Math had reportedly been heard saying "I just wish the Talkers had accounted for the wind in the 11th." Math's vibes were stable, but the numbers on Math's face were looking more and more imaginary. Until finally, as all the ILB teams gathered to view the blessing and decree results, Math refused to join them. Instead, Math simply said the words, "I'll see you all again. You can count on it." The Spies all knew what was coming, and instead of viewing the results, stayed and sat with Math for Math's final hour. It all happened very quickly, according to eyewitness reports. There was a loud crunching sound, followed by a low hum and pop—and where Math stood, no two reports are the same on what took place.

Outside of one detail.

When New Math appeared, in Math's pitching hand, everyone claims to have seen a faint glimmer.

The glimmer of a star—a star that nobody even knew was there.

"Math was always a variable—but Math's love for the Spies was, and always will be, a constant."

Rumors that Velazquez was specifically targeted for a performance-enhancement Alternation by the ILB to prevent Velazquez from reaching a negative star rating have no supporting evidence and can be safely dismissed.

After the Alternation, Math became rather different.

This concludes the entry.

Speculation about Math Velazquez abounds. One such flight of fancy has been "misplaced" here. Refresh the page for another.

Math has always existed, for Math is intrinsic in the nature of the cosmos. Some theories suggest that Math was the one who set the universe in motion; in any case, Math is eternal, vast, omnipresent, and the Blaseball player is but a tiny shard.

As reads a letter to the editor that was intercepted before publication in [REDACTED], a popular magazine:

Why has the eternal order of the cosmos chosen to do this? Perhaps it is like Sarl Cagan said: you are the universe experiencing itself. Maybe Math wanted to experience mathself, be on the field of the world rather than in the stands. And so we have Math Velazquez, Blaseball player, a fragment that is very nearly blind in comparison. A single point perspective subject to the chaos and uncertainty of the universe. Just to see what it's like.

Math has made no statements confirming this theory.

Math has made no statements denying this theory.

This concludes the entry.