Zion Aliciakeyes is a player in the Shadows for the Hades Tigers, and has been with the team since Season 1.

Aliciakeyes joined the ILB as a lineup player for the Hades Tigers with the Return of Blaseball.

Aliciakeyes was originally a █-star batter. During the Season 1 elections, Aliciakeyes's batting stats were randomized by the Soul Swap blessing, resulting in a rating of .

On Season 9, Day 6, at the top of the eighth inning, Aliciakeyes was walked with the bases loaded and somehow ended up on a secret fifth base rather than heading to first. Somehow, this resulted in Randy Castillo being walked and then immediately scoring in the following at-bat. After that, Richmond Harrison hit a single, allowing Aliciakeyes and two other baserunners to score, for 3 runs scored with two runners left on base.[2]

During the Coffee Cup, Aliciakeyes played for Atlético Latte as a lineup player.

During the Season 12 elections, Aliciakeyes received the Flippers modification due to the Tigers' Trust will.

On Season 22, Day 4, Aliciakeyes retreated to the Tigers' Shadows in exchange for Lottie Ceilingfan at Sixth Circle Stadium via the Ratified Voicemail.

Before joining the team, Aliciakeyes was a Chinese Hadean stadium imp who worked day and night to both support the Tigers and work on her masterpiece: A mech specifically designed for Blaseball named the Iron Lion. After years of effort, she showed up with the completed mech at a Hades Tigers training session. It was reported that several onlookers questioned if mechs were allowed in Blaseball. Said onlookers were promptly crushed by the Iron Lion. She was brought onto the team shortly after.

Zion shares a last name with Yellowstone Magic pitcher Curry Aliciakeyes. Zion and Curry have never been seen in the same room. However, Zion does not wear glasses, so they cannot be the same person. 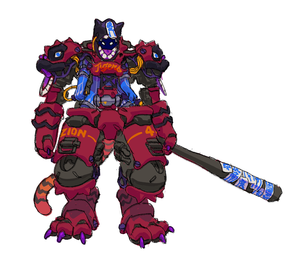 One version of the Iron Lion. The shoulder pauldrons resemble the heads of lion costumes in traditional Chinese lion dance, and the mech and her bat are adorned with fulu talismans.

The Iron Lion is a mech built by Aliciakeyes with the help of her sister Curry. The name "Iron Lion" was chosen due to its rhyming nature. Being stadium imps who come from Hades, neither of the Aliciakeyes sisters were aware of the difference between lions and tigers when this naming took place.

The Iron Lion is constantly being tinkered with and retrofitted, and thus changes its appearance often. Generally, she is predominantly red or orange, with hands and legs that mimic the look of tiger paws as well as a striped tail. The dimensions of the mech can be any size, "as long as it's small enough to fit through the stadium doors," a rule implemented by Fearful Symmetry due to a series of unfortunate accidents in the past. This has been dubbed the "No Large Robots" rule and has been written in red marker on the whiteboard of her workshop.

Aliciakeyes's timid demeanor still shines through despite the Iron Lion's intimidating appearance. Despite being outshone by her hard-hitting companions on the Hades roster, her mech is a fan favorite among stadium imps as well as younger fans of Blaseball.

During Season 13, when Aliciakeyes was swept Elsewhere by Flooding, the imp found herself stranded for some time. Eventually, she hit upon the solution of jury-rigging the Iron Lion with flippers of driftwood and scrap metal, to better brave the waters, and the innovation allowed her to return home to Hades. With the thoroughly unpleasant memory fresh in her consciousness, Aliciakeyes proceeded to, during the elections, take steps to make the modifications permanent. Soon enough, the Lion became the proud bearer of a fresh set of Flippers, and Aliciakeyes also took to wearing a prototype pair of her own during flooding games as a precaution.

Aliciakeyes has stated that joining the Tigers has "fixed her sleep schedule, cleared her skin, and watered the two houseplants in her apartment." She has a self-imposed "No Drinking Coffee" rule. She has admitted that this is, in fact, somewhat related to her "No Large Robots" rule but refuses to elaborate on this further.

During the passing of the Alternate Reality decree, Aliciakeyes attempted to prevent Yazmin Mason (IF-17.34) from being transferred to another dimension. This resulted in a dimensional portal closing around her arm. During the break between seasons 4 and 5, she replaced the lost limb with a custom-built prosthetic. Aliciakeyes has refused all interview questions on the topic.[3]