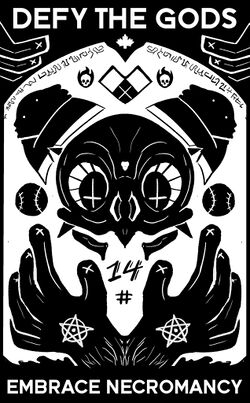 Necromancy (also referred to by Fans as resurrection and outcineration) is the process by which incinerated Players can exit the Hall of Flame. While it has been stated before that incineration is the only way out of playing Blaseball, numerous Players have exited the Hall of Flame and returned to active play.

Necromancy rarely occurs without consequences. In many cases, revived Players must fulfill a Debt, while in others, they can only rejoin the league due to the incineration of another Player. However, special events, such as Day X and the ILB Semi-Centennial, often result in mass-necromancy without consequence.

At the end of Season 6, Jaylen Hotdogfingers became the first Player to return from death via the Lottery Pick Blessing. A full list of Players, and the methods by which they were revived, is provided below.

During elections, Blessings and Wills have been provided which allow Teams to steal players from the Idol Board. Since it is possible to idolize incinerated Players, on multiple instances this has been used to perform necromancy. Deceased Players revived using these blessings receive the Returned and Debt modifications.

Players resurrected via this method join their new Team's roster in the position they have more Stars in, discounting items. Prior to Season 23, the resurrected Player would replace another Player on the active roster, sending them to the Shadows in the process. In the case of Lottery Pick, this would be the Player in their position with the lowest Star count, while in the case of Plunder, the Player would be selected at random. However, in the case of Niq Nyong'o's resurrection, Nyong'o would join the Philly Pies' rotation without sending anyone to the Shadows, extending its length in the process.

Only the Lottery Pick Blessing and Plunder Will have been used to successfully perform necromancy in the past, though Election necromancy is theoretically possible under different circumstances. Blessings that pull Deceased Players off the Idol Board, such as Blind Date and Popular by Association, could theoretically be used for necromancy, but this has never been successfully executed. Since Wills are executed as filed, using a Will to move or trade a Player that gets incinerated later in the Season could revive them, but this has never been executed either. Numerous Blessings that recruit Players with specific modifications have also been seen in the past, but whether or not these can target Deceased Players is unknown.

Below is a list of Players that were resurrected via election necromancy.

During an episode of Inside a Blaseball, it was confirmed that this trade was treated as a Feedback swap, and could have been prevented by Mclaughlin Scorpler's Noise-Cancelling Headphones.

It is speculated that an Inhabiting Player could be swapped in Feedback, as Feedback swaps between batters swap the active batter for a random batter on the opposing Team. However, this has never been witnessed, and whether it would have the same effects as the swap between Hotdogfingers and Henderson is unknown.

The Hall Stars are a Team of the fourteen most tributed Players in the Hall of Flame at the time, formed during Season 10, Day X. All Players on the Hall Stars gained the Squiddish modification as a result of the Team's Squiddest modification. The Player on the Team with the highest pitching Stars, Jaylen Hotdogfingers, was chosen to be the Team's sole pitcher. The other thirteen Players all played on the lineup, in descending order based on Peanuts they were paid in tribute.

Upon beating THE SHELLED ONE'S PODS, all Players on the Hall Stars were Released, and their Soulscreams were replaced with Soulsongs. Below is a list of Players that were resurrected as members of the Hall Stars.

Over the course of the fight, Sebastian Telephone would be incinerated again and replaced with Scrap Murphy, and Jaylen Hotdogfingers would swap in Feedback with PODS pitcher Axel Trololol. The replacements were Released in their stead. Hotdogfingers would fall back to the ILB with the other PODS, joining the San Francisco Lovers.

Squiddish is a modification that causes incinerated Players or Teams to be replaced with a random Player or Team in the Hall of Flame, as opposed to a rookie hatched from the Field of Eggs. Despite the modification existing since Season 9, it has only activated on two occasions: once during Day X, and once on a Team-wide scale in Season 24.

Upon the incineration of the Hawai'i Fridays, the Carolina Queens would inherit their Squiddish modification. Whether this is always true of Squiddish is currently unknown.

Below is a list of Players and Teams revived after the incineration of a Squiddish Player or Team.

After winning their third Championship in Season 12, the Hades Tigers evolved, gaining the Ambush modification in the process. Whenever a Player is incinerated in a Game the Hades Tigers are playing, the Tigers will Ambush a random Player from the Hall of Flame, recruiting them to their Shadows. Ambushed Players receive no additional modifications after their revival. Incinerated Players that are unseen by Fans can still be Ambushed, as was seen with Archie Lampman being Ambushed before the reveal of the Mallorca Whales in the Library.

Below is a list of Players revived through Ambush.

During the Pre-Season of Season 18, Chorby Soul was taken to the Vault and Preserved, exiting the Hall of Flame in the process. Aside from the Legendary modification given to all vaulted Players, Soul gained no additional modifications upon being Preserved.

The Vault's relationship with formerly incinerated Players seems largely inconsistent, however. New Hampshire Eggplants Player Cote Loveless remains labeled as Deceased even after Preservation, existing in both the Vault and Hall of Flame at the same time. Upon being Vaulted, York Silk would lose the Returned and Debt modifications, similar to a Player returning to the Hall of Flame. However, Returned Players that were vaulted during the ILB Semi-Centennial retained this modification.

Unlike Ambush, Players with Ego that were invisible to Fans at the time of the ILB Semi-Centennial would not join the Rising Stars, as can be seen with Declan Abbott of the Laredo Excavators. As such, they remain in the Hall of Flame.

Below is a list of Players revived during the ILB Semi-Centennial, and the Team they would join afterwards.

After the Semi-Centennial, Sutton Bishop would be targeted by the Vault Swap Blessing, moving them to the Boston Flowers' active roster in exchange for Glabe Moon.

Beyond the methods listed above, there have been numerous edge cases in which the line between life and death has been blurred, bringing into question whether or not these could be counted as necromancy. Such edge cases are listed below.

On Season 4, Day 86, Hawai'i Fridays hitter Thomas England would be incinerated and replaced by Sixpack Dogwalker. Due to the Waveback Event however, The Game Band had to back up to an earlier version of the simulation, before England's incineration had occurred. Rather than restoring England to the Fridays' roster, Sixpack Dogwalker would replace England entirely, inheriting their Player ID and Stars, and effectively erasing England from existence. Dogwalker would gain the unique Bangers & Smash bat in the process, giving them a small boost to their batting.

Cote Loveless and their replicas are all listed as Deceased on site, and are capable of Inhabiting Haunted Players and being tributed Peanuts in the Hall of Flame. Despite this, all of them have been members of active Team Rosters, playing Blaseball despite being Deceased. During the ILB Semi-Centennial, as opposed to other Deceased Players who were revived and given the Returned modification, Loveless remained Deceased, playing despite being dead.

On Season 24, Day 16, Dimi Blather of the Maryland Squirrels would haunt Kennedy Loser of the Baltimore Crabs, only to be hit by a pitch from Philly Pies pitcher Niq Nyong'o. Blather became Observed, and would quickly enter a Secret Base to be Redacted. Blather would later exit a Secret Base as an Attractor, though they remain labelled as being Deceased on-site. It is currently unknown what would happen if Blather is Attracted to an active ILB franchise.

Opening of the Hall of Flame

During Latesiesta of Season 24, the Monitor would quit its job, opening the Hall of Flame and allowing every incinerated Team to leave, gaining the Rogue modification in the process. Despite having left the Hall of Flame, these teams remained labelled as Deceased, and did not enter active play. Conversely, Teams that traveled to the Hall corner of the map would gain the Rogue modification and become labelled as Deceased as well, despite remaining in active play. Much like Cote Loveless, these Teams and Players would become visible in the Hall of Flame, and gain the ability to Inhabit Haunted Players. At the end of the Season, it was confirmed that all teams that were active in the modern incarnation of Internet League Blaseball prior to Season 24 would return in the future, including the incinerated Kansas City Breath Mints and Hawai'i Fridays.

Gamma 4 was riddled with many new features[1], one of which appeared during the second half of the Season. On Day 137, both Chicago Firefighters hitter Craig Faucet and Seattle Garages hitter Ryan Bluff would be incinerated by Rogue Umpires. They would be replaced by Jada Díaz and Cravel Larue, respectively. After the game ended, however, Faucet and Bluff would return to their team's lineups, and continue batting in the next game, despite still being marked as Deceased. Faucet and Larue would continue batting for roughly 10 Days, until their positions on the Lineup would finally be corrected on Day 148.

Incinerations that happened earlier in the Season did not result in this behavior, though a similar interaction would be seen with a Feedback swap between Dallas Steaks hitter Sassy Bribes and Hellmouth Sunbeams hitter Skylar Blanks, who would return to their original rosters after the game in which the swap happened, despite still being listed on their new Teams on their player pages.