AlternateThis Player is an Alternate...
Player is replaced with an alternate reality version, stats are randomized.
StableStable players cannot be made Unstable.

Talking to the parasite

Ron Monstera was a pitcher for the Seattle Garages, and was with the team from the Return of Blaseball until being incinerated during the Season β8 elections.

Monstera joined the ILB as a pitcher for the Seattle Garages with the Return of Blaseball.

Despite a mediocre statistical output, Monstera is credited with helping the Garages maintain a winning record for most of Season β2, thanks in part to contributing a shutout victory against the heavily-favored Miami Dalé.

During the Season β4 elections, Monstera was affected by the Alternate Reality decree and replaced by an Alternate. This involved Monstera's stats being randomized, resulting in a combined 11.4 -> 9.2 stat decrease.

On Season β6, Day 91, a Feedback swap was initiated with Hawai'i Fridays player Bevan Underbuck. However, because the Fridays roster was Soundproof, the feedback swap did not occur. Instead, Monstera was described as being "affected by the flicker" when "reality began to flicker."

During the Season β8 elections, Monstera was incinerated as a result of the New Kids blessing and replaced by Durham Spaceman.

It is unclear where Ronbert Kim "Ron" Monstera falls between urban myth, local legend, and cagey drifter. When asked directly about his life before joining the Garages, he gives curt, indefinite answers. If pressed harder, he is likely to brush you off, saying he's "got to get back to his music". Because of this, most of what is known about Monstera is based on oral history and secondhand accounts.

Monstera sightings were first reported in Fremont around the year 1990, around the same time as the Fremont Troll statue was built. Accounts conflict regarding which came first, with some saying that the artists were inspired by Monstera, and others saying that Monstera modeled his appearance after the statue. Over the course of the next few years, locals would often report loud, haunting, droning noises coming from under the Aurora Bridge late at night. Some say this was Monstera, performing rituals in the language of the Trolls, while others say it was just him practicing his music.

The Garages discovered Monstera and his pitching ability, when Theodore Duende accidentally interrupted one of his rituals/practices and was pelted by empty beer cans. Duende realized that Monstera would make a decent pitcher, and invited him to join the Seattle Garages Blaseball Team. Monstera wasn't extremely excited about joining a Blaseball team, but would gladly be a member of their band. Monstera was quickly welcomed into the Garages, becoming a contributing editor to THE SUN IS OUR ENEMY, and forming a friendship with Jaylen Hotdogfingers.

Monstera pitches left handed. He is believed to be lactose-intolerant.

Monstera is the keyboard bass player for the Seattle Garages Family Band. 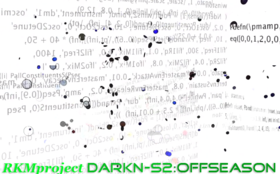 During the enforced #PARTYTIME following Season β2, Monstera released an LP under the name RKMproject. He describes the project as "an electroacoustic exploration of chillwave stylings." The LP, DARKN-S2:OFFSEASON, was created by inverting hellwave energies from the newly-developed Hellmouth region into a dark, wet amplifying substrate. The experimental result was described as "oppressive, but fair" by fellow pitcher Tot Clark. It seems to have strange effects on players for the Hellmouth Sunbeams and may be a part of Monstera's quest for the M Chord.

Quest for the M Chord

Following the Season β2 election, Ron Monstera vowed to use his new thumb and deep knowledge of the Satanic sine waves in order to discover and play the M chord, a theoretical para-acoustic phenomenon tied to the vibrational frequency of the Immaterial Plane, whose study is heavily regulated by the Bureau international d'étude des harmonies ontologiques[1] (BIDHO). In defiance of several of the Bureau's recommendations, Monstera has openly stated his wish to wield the powers of the M Chord in order to save Jaylen Hotdogfingers from her incineration following the Season β1 election and the opening of the Forbidden Book in the hopes of securing the Garages a berth in the postseason.

Aside from his ambient compositions, Monstera has developed a family of diesel-powered brass instruments. The tenor Monsteraphone resembles an uncomfortably swollen French horn mounted on a bus engine and is played via a system of hoses and pulleys. The baritone Monsteraphone interferes with meteorological radar while the bass Monsteraphone is specifically prohibited by international arms limitation treaties.

All three can be heard on Monstera's solo LP Big Honkin' Ron which earned him five-star reviews from avant-garde music blogs and five days of intense questioning from the FBI. Undeterred, he hopes soon to unleash the ultrabass Monsteraphone by hijacking twelve miles of offshore gas pipeline.

In addition to his solo musical career, Ron Monstera has collaborated with several Seattle-based performance artists, including teammate Farrell Seagull, providing ambient soundtracks to their works. He also co-hosts SEAMONSTER, a quarterly showcase of performance art, with Seagull.

The Alternate Reality Ron Monstera is largely similar to the Prime Reality Ron Monstera he replaced; the main differences being his full name (which is Rondrian instead of Ronbert), and some level of change in the specifics of his occult studies. Alternate Ron has cited having relatives who live in Norway, and has described an interest in researching the history of the Jötunn giants of Norse legend.

Both iterations of Monstera have described a unique ability to maintain some level of communication with their myriad alternates across the many universes. The method and substance of this communication apparently varies per universe, but for Alternate Monstera reportedly took the form of an old-style message board . The many Rons reportedly use this link in order to share mundane facts about their lives, such as what they had for breakfast that morning.

After his death during the season 8 elections, Monstera’s name lived on through the Ron Monstera Memorial Cat Cafe and Sanctuary, a cat sanctuary founded in his honor to help care for the population of feral cats he often shepherded at his bridge hangout. The first resident of the cafe was a small cat who had apparently previously spent much of its time living in Monstera’s hat. The team, notably Durham Spaceman, swore to make sure that all of Monstera’s cats would be well-accommodated, and the Cat Cafe has grown into a community staple.

Monstera’s audiomagical research and experimentation was instrumental in a number of incidents long past his death. Garages player Magi Ruiz continued his studies into the M-Chord and built upon them with the help of Alaynabella Hollywood, leading to the eventual necromancy of long-dead Millennials player and shark-puncher Chorby Soul. Monsteraphone prototypes were incorporated into the complex Psychoacoustics system at the Big Garage, their monster-sized sound capacity proving essential to producing the titanic decibels the PA emits on a regular basis. Monstera’s interdimensional sonic research with Farrell Seagull also helped lead to further investigation into the mysterious alternate dimension of Dark Seattle, and to the Garages picking up on distress signals sent by Goodwin Morin in season 10 and bringing her Lightside during the season 10 off-season.