Flickering Players have a much higher chance of being Feedbacked to their opponent.

Flickering is a Player Modification, first seen as a weekly Modification during Season β8 as a result of Jaylen Hotdogfingers'  Refinanced DebtThis Player must fulfill a debt.
This player can cause other players to start Flickering.
See also: Glossary.

Fliickerrriiing is a Player Modification, first seen during Season β10 as a result of the Idol board.

Whenever a player with Flickering plays in Feedback weather, there is an increased likelihood for the player to experience a Feedback event and change teams with their opponent. Prior to Season 12, Feedback events triggered by Flickering were preceded in the event log by "X flickers!" 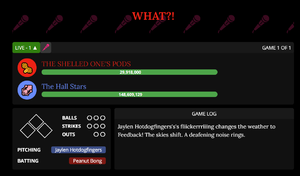 Fliickerrriiing has the same effect as Flickering, though the player is even more susceptible to Feedback events. During Day X, Part II, Fliickerrriiing (as seen on Jaylen Hotdogfingers) had an additional effect of changing the weather to Feedback. This greatly increased the chance of Hotdogfingers swapping between the Hall Stars and PODS, and triggering the Hall Stars' Loyalty modification which would then give the now-PODs pitcher Saboteur.

Flickering was first given to players throughout Season 8 as a result of being hit by Jaylen Hotdogfingers' pitches due to their Refinanced Debt, giving the hit player a Weekly version of the modification.

Additionally, during Season 8, the Idol board had Feedback icons next to the 6th, 11th, and 18th positions. At the end of Season 8, Jaylen Hotdogfingers, NaN, and Sixpack Dogwalker were in those positions respectively, gaining a permanent version of Flickering.

At the end of Season β10, Hotdogfingers was in the 14th position on the Idol board, which similarly to Season 8, had a Feedback icon. As Day 99 ended, Hotdogfingers experienced a Feedback event with Tillman Henderson, which also exchanged their Flickering modification for Fliickerrriiing.

During the Season β17 elections, the Garages received the Reform will, rerolling Hotdogfingers' Fliickerrriiing into Super Idol, helping quell their constant Feedback events.

On Season β20, Day 90, Siobhan Chark of the Hellmouth Sunbeams received Flickering Socks, also from a Glitter event. Chark would experience four Feedback events in the following seasons, ending the Expansion Era on the Breckenridge Jazz Hands with their Flickering Socks intact.

During Season β23, a Fliickerrriiing Potion Drop was an offering in the season's Gift Shop selection. Two of these potions were purchased, with Haruta Byrd of the Pies receiving the first, and Spears Rogers of the Jazz Hands receiving the second, both players gaining the Fliickerrriiing modification. Rogers' Fliickerrriiing modification resulted in a suspenseful game on Day 95 of the season, where they and Famous Owens of the Hades Tigers switched teams due to Feedback events twice, ending with both players returning to their original teams by the end of the game.