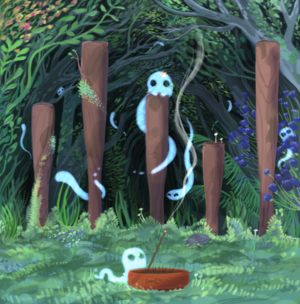 When a Blaseball player passes beyond blaseball, whether through retirement, ascension, or incineration, their bat is planted in the Memorial Bat Forest by The Groundskeeper. The Moss Woman typically crafts bats for new players from the branches of the trees they grow into, though some players prefer to bring their own or request special designs.

While the Memorial Bat forest started purely to memorialize incinerated Flowers players, after the rapid-fire tragedies of Season Four, the Flowers decided to open the Forest to all teams. While the typical memorial is a planted bat, cultivated into a tree, for players whose bats have been passed on or otherwise lost the Flowers hold an Honorary Planting, where they plant a new flower of the incinerated player's team's choice.