Wiki Sandbox
This is a page used by wiki administration to test out functionality. Turn back.

The Philly Pies' Season 1 was the team's first season as a member of Internet League Blaseball, the Evil League, and the Chaotic Evil division. They defeated the Chicago Firefighters 3-0 to win the inaugural Internet Series.

During the regular season, the Pies went 53-46[2]. They entered the postseason as the 3rd seed in the Evil League, just barely beating out the Houston Spies due to Divine Favor ranking.

The Pies then entered the Internet Series as underdogs against the Good League champion Chicago Firefighters. The Pies would also sweep this series 3-0, taking the crown as inaugural Series champions as well as capping off an undefeated postseason run that would continue into Season 2.

The Pies received the blessing Steal Best Hitter, which sent August Mina to the Dallas Steaks for league-favorite Jessica Telephone. 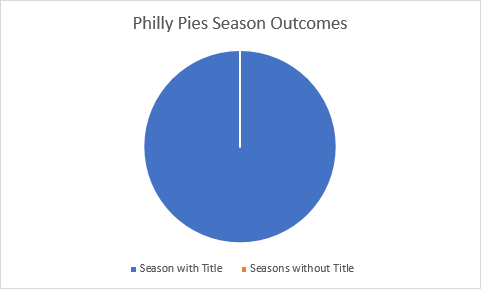