Friend of CrowsIn Birds weather, pitchers with Friend of Crows will encourage the Birds to attack hitters.
The crows will attack a hitter, resulting in an automatic out.
See also: Glossary

Ruslan Greatness is a pitcher for the Philly Pies, and has been with the team since Season 1.

Greatness joined the ILB as a pitcher for the Philly Pies with the Return of Blaseball.

During the Season 5 election, Greatness's batting, baserunning, and defense fell half a star as a result of the Charleston Shoe Thieves' Bad Neighbors blessing.

On Season 7, Day 91, Greatness partied and received a ½-star boost to pitching, baserunning, and defense, and a ★-star boost to batting.

During the Season 9 election, Greatness received the Friend of Crows modification via the Forecast: Birds decree.

During the Coffee Cup, Greatness played for the Milk Proxy Society as a lineup player.

During the Season 12 elections, all of Greatness's stats were increased as a result of the Infuse will.

Born Ruslan Fairfield, Ruslan Greatness was ironically given the name "Greatness" by his high school blaseball teammates on account of his poor play. A Pies scout, running behind and suffering from severe anxiety, failed to grasp the irony and signed Greatness on the spot.

Greatness's pitching weakness comes from his massively overdeveloped body. A towering 7 feet of strongman muscle, Greatness would otherwise be well-suited to being a formidable batter, but his bulging muscles impede his pitching. Greatness's teammates beg him to change positions, but he considers batting crass and uncouth. "No bat," says Greatness. "Only throw." Outside the game, Greatness can be found weightlifting and participating in strongman and powerlifting competitions.

Despite sandbagging the Pies early in his career, they were unable to get rid of him due to a poorly written contract. He has since proven himself by winning numerous clutch games, although it is unclear whether he is actually playing well or if the rest of the team is just stepping up to compensate for his lack of skill.

Greatness's nigh-impenetrable but unidentified Eastern European accent befuddles his fans. When asked, he claims to be from Conshohoken. Fans concerned about Ruslan investigated this claim, and confirmed that Ruslan was not only from Conshohoken, but that there were absolutely no medical conditions nor traumatic events that were the cause of Ruslan's strange behavior.

Greatness lived with former Pies relief fielder Morrow Wilson in Powelton Village and sleeps on their couch. This is despite the fact that Wilson never invited Greatness to stay with them, and has in fact tried to kick him out many times. The shenanigans these two roommates get up to are the basis for the hit sitcom My Roomie Ruslan. 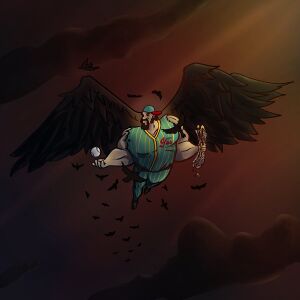 Ruslan: King of the Birds (By @raevpet)

Greatness is known for his love of birds, especially crows. He has many bird friends that roost near whatever teammate's apartment he is crashing at. Greatness treats the birds like his children and has given them names like Geoff, Jeff, Ruslan Junior, and Conshy the Black Fang. The birds in turn are affectionate with Greatness and like to huddle around him as he tells meandering, blatantly untrue anecdotes about his childhood.

During birds weather, Greatness draws upon the power of bird friendship to transform into Ruslan: King of the Birds. In this form Ruslan sprouts black wings and soars into skies above the Blaseball field, accompanied by a retinue of his avian compatriots. To witness the King of the Birds is to witness true majesty, and there's nary a dry eye in the stadium when Greatness takes flight