Bright Zimmerman was a lineup player for the Philly Pies, and and was with the team from the Season 23 elections until being incinerated on Season 24, Day 26. Zimmerman had played for the Canada Moist Talkers, Charleston Shoe Thieves, and Kansas City Breath Mints.

Zimmerman joined the ILB as a pitcher for the Philly Pies with the Return of Blaseball.

During the Season 5 elections, Zimmerman's batting and pitching fell half a star as a part of the Charleston Shoe Thieves' Bad Neighbors blessing.

During the Season 14 elections, Zimmerman gained the Roamin' modification as a result of the Moist Talkers' Revoke will, and wandered to the Charleston Shoe Thieves.

On Season 17, Day 78, Zimmerman retreated to the Shoe Thieves' Shadows in exchange for Oscar Dollie via Choux Stadium's Fax Machine.

During the Season 19 elections, Zimmerman gained the On an Odyssey modification as a result of the Shoe Thieves' Shadow Revoke will, and wandered to the Kansas City Breath Mints.

Over the course of Season 23, Zimmerman entered and exited the Breath Mints' Shadows three times as a result of Kansas City FreshDome Voicemail effects, ending the Season on the lineup.

During the Season 23 elections, Zimmerman roamed to the Philly Pies.

On Season 24, Day 26, Zimmerman was incinerated and replaced by Scouse Bedazzle.

Bright Zim (on official documents, Bright Zimmerman) is a merfolk pitcher for the Philly Pies. He gained renown pitching for the Underleagues' Atlantis Sharkbait. When he came ashore, he introduced himself formally as "Bright Zim, merman." His surname was incorrectly recorded as Zimmerman, which still follows him on his official records to this day.

It is rumored that Zim actually joined the team to escape a massive fish debt he had mysteriously accrued in Atlantis. This is supported by the fact that when he first joined the team he initially spent much of his time in disguise as a popular folk musician. After it was pointed out to him that his tail easily gave him away, he abandoned the disguise, feeling rather silly.

While the move to an Internet League Blaseball team is a step up in the world of blaseball, it is one rarely taken by merfolk due to their difficulties in living on land. Zim uses a personal mobility device for this reason. His wheeled aquarium is large enough to sit comfortably inside, and can be steered from within by just a flick of his tail, thanks to sophisticated motion sensing technology. Zim's pitching has been inconsistent since joining the Pies, something he attributes to the differences between pitching through air and water. He has a special Pitching Tank that he plays from, which gives him greater range of motion than the mobility aquarium he uses to get around. It takes roughly ten minutes to set up each time he takes the mound. 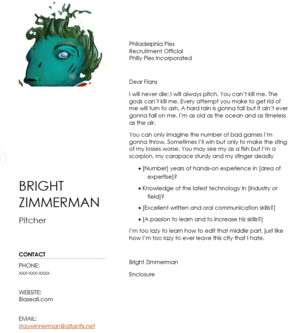 Due to his lackluster performance Pies GM Sam Hinkie has long sought to remove Zim from the team. However, Zim has taken a liking to the flavor of the water in the Delaware river and adamantly refuses to leave. After taking several community college classes in splorts law, Zim was able to create the Iron Contract, one of the most unbreakable contracts in all of Blaseball. Attempts to trade, fire, revoke, or otherwise get rid of Zim have all been thwarted by the Iron Contract's labyrinthine tangle of clauses and stipulations. "You shall never be rid of me!" declared a power-mad Zim, tempting fate. "A hard rain may fall, but it shall not strike me!"

During one of these impromptu rants, Zim accidentally let a bit of spittle fall onto the Iron Contract. In a freak coincidence, the spittle smudged the word "Philadelphia" so it looked like the word "Canada." The tendril-like clauses of the contract promptly seized Zim and dragged him flailing and screaming across the northern border.

There is a general consensus that none of this would have been an issue in the first place if Zim had put half as much effort into his pitching as he did thwarting attempts to get him off the roster.