Player: This Player will be occasionally attacked by Birds.

Team: Players playing for this Team will be occasionally attacked by Birds.

The Shelled One, Items

For the Team Modification which will cause its players to play 50% better in Birds weather, see Affinity for Crows.
For the Player Modification for pitchers, which will increase the chance opposing hitters will be ambushed by Birds, see Friend of Crows.

As a Team Modification, it was a signature modification of THE SHELLED ONE'S PODS.

Curse of Crows increases the likelihood hitters will be ambushed by Birds in Birds weather, resulting in an Out. Unlike the additional message indicating when Friend of Crows has activated, there is no indication that Curse of Crows has influenced the chance of a successful corvid ambush.

Curse of Crows has no effect on pitchers.

Curse of Crows was first observed during Season β9, Day X, when the Shelled One summoned its team and proceeded to do battle with the Season 9 Internet Series champions the Charleston Shoe Thieves. The Shelled One switched between all the possible weather types at the time repeatedly, resulting in four separate successful ambushes of the PODS when the weather had switched to Lots of Birds:

Each time an ambush resulted in an Out, the PODS took 25,000 damage. In comparison, flyouts and groundouts dealt approximately 2,000 damage. An example of one of the PODS (in this case, Peanut Bong) being attacked by birds.

Birds attacked only once during Season β10 Day X, assaulting Peanut Bong at the bottom of the 9th. The damage received by the PODS was significantly higher (see inset image), dealing 2,050,000 points in a single out. 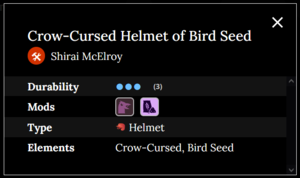 With the disbanding of the PODS following the Shelled One's defeat, Curse of Crows was no longer seen in active play until Season β24, Day 37 in the Garden - a Prize Match in Glitter weather between the Core Mechanics and the Boston Flowers.

Shirai McElroy (who was not pitching at the time) gained the contents of a shimmering crate which dropped at the start of Mechanics' first inning - the Crow-Cursed Helmet of Bird Seed. As McElroy was a pitcher for the remainder of the Expansion Era, Curse of Crows had no detrimental effect on them despite playing in two further games with Birds weather before the Nullification of Blaseball - on days 66[1] and 86.

The following songs are about Curse of Crows: