It is not yet known whether Tot Fox is a human or, in fact, a fox. It is speculated, however, that Fox's theoretical fox form would possess an entire blaseball batt where one would normally have a tail. Online correspondence[1] has confirmed that, fox or not, Fox has the ability to read and write. 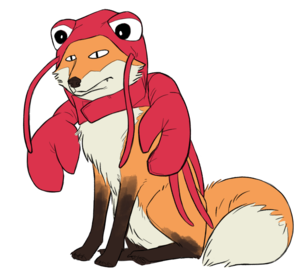 Local rumours have suggested that during the events of the Feedback, the ever-snipping hand of The Olde One had begun to be felt by Tot Fox. When they took their batting position for the Crabs, they had already been carcinized; emerging as neither entirely human or fox but as an eldritch chimera possessing the bottom half of a giant crab, the torso of a human, and the head of a fox.

The Breckenridge Slummit Daily disputed these rumours, insisting that Tot Fox still looked their normal, ambiguously human, ambiguously fox self. Lead sports reporter Joe Clullinlane was quoted as saying "You can't just stick a fox in a crab outfit and claim they've been carcinized." A response published in the Baltimore Slun by Crabs co-managers Howard and Dwayne suggested that the Clullinlane would face the "wrath of the Mother Crab for this slander".

In game 3 of the season 10 Internet Series Tot Fox batted in teammate Silvaire Roadhouse and scored the 10th run in the final game of the ILB Championships, which triggered a black hole that destroyed both the moon and the sun.

2 Shortly before ascension Tot was caught on video by a fan at the Crabitat where she commented that it "was an accident, and [she was] really quite embarrassed about the whole thing". The background of the shot includes footage of the rest of the Baltimore Crabs celebrating their victory, and Silvaire declaring she is ready to "throw down with any planetary body that's getting too big for its britches".

During the Season 4 Day 25 game in which Tox Fox was swapped to the Crabs, Crabs Poet Laureate Runolfio Peeper threw a paper airplane onto the field, which one of the groundskeepers picked up. It had the following scrawled on it:

Tot Fox once fought
For Hands and thought
He'd not Guy Fawkes
Their batter’s box
But he was caught
In feedback talks
And so was brought
To Old Bay’s docks
Now he’ll detox
From jazzy squawks
And earn his shot
A red mascot
That has been wrought
By blaseball’s plot.