Rumor / Community Lore
This article contains lore created collaboratively by the Blaseball community. It is just one of many Rumors that we've found in the Interdimensional Rumor Mill. You can find more Rumors about Henry Marshallow at their Rumor Registry.

Henry "Hank" Marshallow was a botany student at Washington State University who (per reports from classmates) went mysteriously missing during a routine trip to collect samples from Yesler Swamp. Visitors to the swamp in concurrent years sometimes reported seeing or hearing what appeared to be a distressed, drowning figure in the swamp, which was always gone by the time anyone reached it to assist. 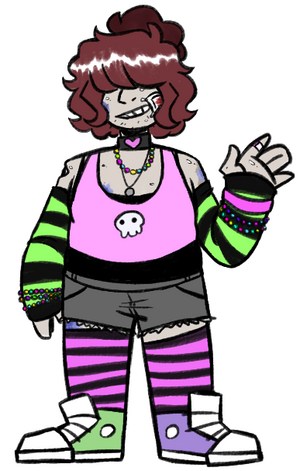 A photo of Hank.

The "bog body" was not formally identified as Hank Marshallow until it emerged from Yesler Swamp sometime during the great return of Internet Blaseball and began attending Seattle Garages games with some frequency. Despite self-admittedly having no prior experience playing Blaseball, Marshallow told reporters on Season 3, Day 80 that they felt called to approach the field in Derrick Krueger's absence since "the game was already going so badly, pretty much anybody could finish it, you know?" The Garages welcomed Marshallow, who continued to be a part of the pitching rotation until its feedback to the Philly Pies in Season 9.

In an interview given to Splorts Illustrated over the Grand Siesta, Marshallow is quoted as "adjusting to Philly pretty well, I think? There's a lot of swampland in the Appalachians I'm excited to see, and I've been going caving a bunch. Plus the Pies have way better food than the Garages, everything in the Garage kitchen sucked after Mike left."

Marshallow is a self-described scene kid, and can often be spotted at concert venues or raves around Philadelphia while not pitching or at practice. It holds the current ESBN title of "Tackiest Dresser Off The Field", and seems to do so proudly.

Marshallow maintained an impressive ERA throughout the first few seasons of the Expansion Era, though was notably Faxed into the Shadows in the back half due to Consumer attack complications. Though some fans hold Crabs pitcher Axel Campbell responsible for stealing Marshallow's item and preventing any form of defense against the attacks, Marshallow has been open to reporters about any lack of rivalry between itself and Campbell, stating that it's "water under the Bay Bridge at this point".

Marshallow has also been publicly open about enjoying their time off from pitching while in the shadows, and has recently been seen playing goalie for the Phantom Fillings, a local hockey rec league. It can also be found skating for local roller derby team the Carrot Cakes, under the pseudonym Monster Marsh.