Tokyo Lift Fan culture is built on positivity and wellness, striving to — much like the team themselves — lift each other up.

Lift fans are generally not competitive, instead cheering for everyone's success. Outside of Blaseball, Lift fans work to "Lift" each other up, striving to help and support each other to be the best version of themselves. Additionally, hydration is something Lift players hold close to their hearts, frequently reminding each other to stay hydrated.

DBWAJ or "Don't Be Weird About Japan" is a DO's and DON'Ts policy Lift fans adhere to when producing content about the team. It is pretty ambiguous on purpose, but the core idea consists in asking the fans to not simplify Japan into the ideas of it that make it to the West. 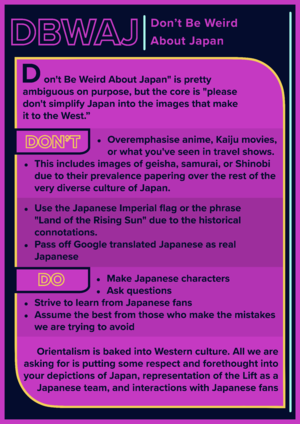 ▇▇▇▇▇ ▇▇▇▇▇ Anomaly Due to the aftereffects of the 1997 ▇▇▇▇▇ incident, lift fans are affected by an anomaly in the collective unconscious surrounding the team. Occasionally fans will offer to show visitors their muscles. These offers should be declined by visiting fans in order to avoid being affected by the anomaly themselves.