Seattle is the home of the Seattle Garages, as well as The Only Company, Jamazon. The city is known for originating the blunge scene, best known for spawning the Garages team song and chart-topping hit "Smells Like Team Spirit". Seattle also has a reputation for perpetually bad, rainy weather, which has only been made worse during the Solar Eclipse. It is however known for its picturesque sunsets. It has a counterpart in the Mirror World known as Dark Seattle. 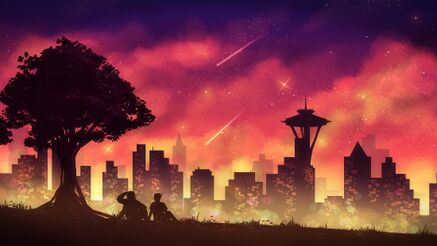 An example of one of Seattle's sunsets, with Sparks Beans and Goodwin Morin. Art by [https://twitter.com/_erisiar @_erisiar