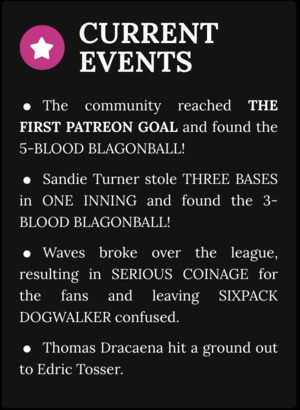 The Bulletin Board summarizing The Waveback Event, third bullet point.

The Waveback Event is a Season 4 incident that resulted in most participants seeing their coin balances doubled, as well as altering the existence of new Hawai'i Fridays player, Sixpack Dogwalker.

The Season 5 Bulletin Board wrote in summary: "Waves broke over the league, resulting in SERIOUS COINAGE for the fans and leaving SIXPACK DOGWALKER confused."

On August 28 2020, the Blaseball game servers "experienced a significant loss of data" that forced the Umpires to roll back the state of the game world by approximately eight hours, to 2 AM Pacific time.[1] The events that occurred within the lost timeframe (such as team standings and player changes) were manually reconstructed to bring the game back to its most recent date, which was Season 4 Day 88. Blaseball was in siesta for several hours while the issue was repaired.

As compensation for the error, fans experienced a doubling of their coin balances, as well as a complementary gift of five vote tickets.[2]

Meanwhile, the existence of Sixpack Dogwalker became a vocal concern among fans, because Dogwalker was the only player to be added during the lost timeframe (when Fridays hitter Thomas England was incinerated on Day 86). If all data was lost, and restored to an earlier date, as umpires had stated, then England's incineration never occurred and Dogwalker's induction never happened.

Miraculously, Dogwalker was found to be perfectly intact after the siesta ended. Dogwalker returned to play bearing the unique bat Bangers & Smash, in honor of England. The player seemed to have been manually repaired by umpires, since they appeared to inherit the same stats as Thomas England rather than randomly generated stats. Notably, Dogwalker's new player profile also included a specific and unique Pregame Ritual: "Talking to The Microphone."

During the hours that Blaseball was under siesta, The Commissioner tweeted, "Everybody do the wave lol 🌊",[3] causing many fans on Twitter to reply with wave emojis. Simultaneously, The Microphone tweeted "if you can hear me wave",[4] using letter emojis to construct their message. The Commissioner continued to retweet several instances of fans "doing the wave" with wave emojis for the remainder of the siesta. This brief social activity inspired the name of this event.