Thomas Kirby is a lineup player in the Shadows for the Hades Tigers, and has been with the team since Season β19, Day 22. Kirby has played for the Dallas Steaks and Chicago Firefighters.

Kirby joined the ILB as a lineup player for the Dallas Steaks on Season β2, Day 72, after the incineration of Zi Delacruz.

On Season β4, Day 4, Kirby was exchanged to the Chicago Firefighters due to Feedback. Kirby was replaced by Paula Mason.

During the Season β5 elections, Kirby's defense rating increased by due to the Katamari blessing.

On Season β8, Day 55, Kirby swallowed a peanut and suffered an allergic reaction, decreasing batting and baserunning by , and pitching and defense by .

During the Season β9 elections, Kirby was incinerated as a result of the Dead Weight blessing and replaced by Socks Maybe.

On Season β19, Day 22, Kirby entered the Hades Tigers' Shadows as a result of the Tigers' Ambush modification. Ambush activated after the incineration of Ohio Worms lineup player Igneus Delacruz.

While many of his team and league mates can boast exotic names and mystical/mythological origins, Thomas "Tom" Kirby is a perfectly fine if slightly pedestrian cishet white male.

Thomas Kirby is 5'9" in height, and his weight is self-reported as "having maybe gotten a little soft around the middle, but that's not unusual when you start getting a little older and slow down a bit".

His appearance has been described as looking "very familiar", "almost exactly like someone [you] went to school with", and "sort of like that guy from a movie a few years back".

Kind of like if Boruto's dad was Boruto? Like imagine an old, kinda schlubby Boruto. But not quite? We love him anyway.

Unlike former teammate Sebastian Telephone, who was spawned fully-formed from a payphone, Kirby was born from an unremarkable pregnancy between Jeffrey "Jeff" Kirby and Judtih "Judy" Kirby. Judy described the conception and pregnancy as "average."

Kirby drives a midsize pickup truck. In interviews, he describes it as "just enough to get the job done". He is always happy to help a teammate move to a new residence or transport a piece of bulky furniture home.

Kirby and his family live in a 3 bedroom, 2.5 bath ranch-style home in Chicago, where he has always been from. He and his wife Amanda have one son and one daughter. The family has one dog, a retriever mix, and one cat, a shorthair.

Kirby eschews any sort of value judgments or criticisms of his more extraordinary league mates. He treats all Blaseball players, friend or foe, with a polite respect. He does admit, however, that he can't help but respect and appreciate a good, firm handshake. He has gone to seven Phish concerts in his lifetime. This was a business expense.

Whatever a teammate's race, orientation, identity, or creed... Kirby's only demand is that they make sure to set their retirement account contributions to ensure employer matching is maxed out. It isn't a matter of judgment, just a matter of prudence.

Kirby received a mixed welcome upon his transfer to the Chicago Firefighters. Some Firefighters were glad to meet him, others missed Paula Mason and wished to trade him back. After hitting a three-run home run in the Season β4 post-season match with the Millennials (the only runs the Firefighters would achieve in that match), however, Kirby became a fan favorite.

"You can just call me Tom." — Thomas Kirby

"I will never believe it" — Thomas Kirby

Thomas "Tom" Kirby is terribly missed by his old team and fans from his time with the Dallas Steaks. 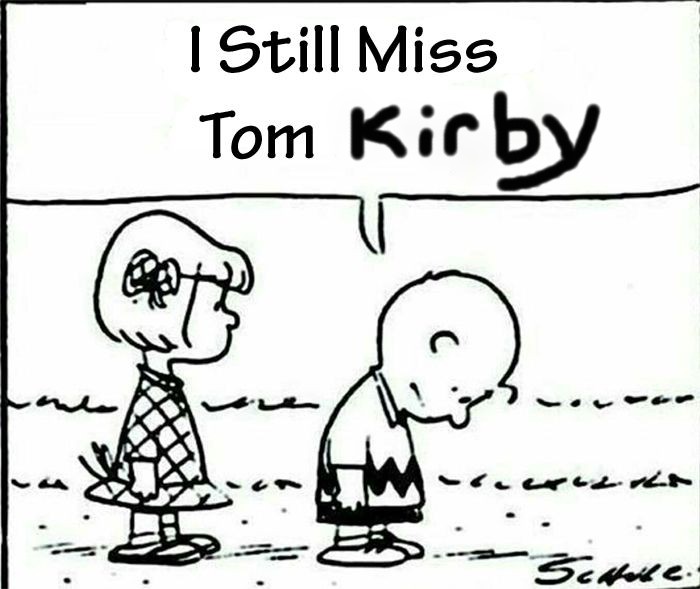