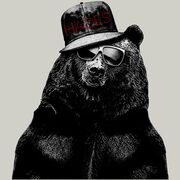 That Bombastic is the Hades Tigers' first base coach. He is a 1,300-pound brown bear, usually seen wearing his signature sunglasses, which do a very effective job of hiding the fact that he often sleeps through games. General manager Fearful Symmetry has often complained about his laziness, but pitching coach Kick Rocks insists he has "true Blaseball potential" in him.

That Bombastic is also a Blues musician, and spends much of his time outside of Tigers games working on his latest album or EP, or promoting it on his twitter account.