Summers Pony is a lineup player for the Seattle Garages and has been with the team since Season 8, Day 102. Pony has previously played for the Dallas Steaks and Philly Pies.

Pony joined the ILB as a lineup player for the Dallas Steaks with the Return of Blaseball.

On Season 6, Day 62, Pony siphoned some of Hawai'i Fridays lineup player Karato Bean's defensive ability in a game with Blooddrain weather, increasing it from ★ to ★★.

On Season 7, Day 86, some of Pony's defensive ability was siphoned by Hades Tigers lineup player Usurper Violet in a game with Blooddrain weather, decreasing it from ★★★★ to ★★★. On Season 7, Day 99, Pony partied and increased each rating by ★-star.

During the Coffee Cup, Pony played for FWXBC as a pitcher.

During the Season 14 elections, Pony retreated to the Shadows of the Seattle Garages in exchange for Oliver Loofah as a result of the Garages' Foreshadow will.

Although it is unclear how Summers Pony, an incredibly buff horse, first learned to play blaseball, Pony trotted onto the field at a Dallas Steaks practice. Despite the rule that horses are not allowed to participate, all in attendance were too intimidated by Pony's muscularity to try to turn them away. Any lingering thoughts of stopping this monolith of equine flesh disappeared after Pony hit a triple in their first at-bat, and they were promptly signed to a multi-year contract.

Pony was fourth in the Steaks' rotation, an above average hitter, and a challenge to all traditional notions of what it means to be a horse.

Pony was switched with Rai Spliff to the Philly Pies during a season 8 feedback. Upon Rai's departure, Pies GM Sam Hinkie loudly and angrily bemoaned to anyone who would listen that they had just ordered a shipping crate of Pies-branded rollerskates for Rai. As a joke, JT put two pairs of skates over Summers' hooves and convinced them that it was part of the uniform for the fourth-hitter position. Hinkie, eager not to let those skates go to waste, quickly agreed. Summers, unable to meaningfully propel themself in the skates, is pushed around the bases by Ruslan Greatness, the only team member large enough to shoulder this burden.

Since arriving in Philadelphia Pony has become close friends with Beasley Day, the two of them often chilling together on the grass between games. The interspecies friendship has proven to be a source of delight for many flans. Pictures of the two often adorn many of the more clickbaity Pies social media pages.

Pony was swapped with Farrell Seagull to the Seattle Garages during a season 8 feedback. When asked about their newest addition, Team Captain Theodore Duende was cited saying "We've gotten a duck, a cyborg, a catgirl, a temporary heavy metal grandma, and a plant person this season, so this may as well happen, too. Everyone is capable of being a Garage, the more the merrier, honestly."

Shortly after their arrival, their rollerskates broke. The team attempted to let them run the bases without skates, however this proved difficult for Pony, given their penchant to show trot and not reach the base in time. To remedy this, Oliver "Oll-E" Notarobot and Oliver Mueller collaborated in fixing and upgrading Pony's skates into horsepowered rollerskates. The upgrades include heavy duty all terrain tires, reinforced leg supports, and signal lights. A number of bumper stickers have been placed on them. The process was difficult, given Pony's distaste of their hocks being handled, but was ultimately worth it. Pony has taken to these alternate skates well, and even allows Notarobot to assist them with putting them on and taking them off. 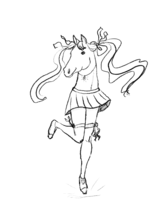 Pony is a member of the "Street Animals" group founded by Oliver Mueller, a group dedicated to teaching animals how to skate. As expected, they are proving to be a natural at not only horsepowered rollerskates, but skateboarding as well.

Pony has expressed curiosity in Quack Enjoyable's magical bat. After seeing it transform him from a duck into a handsome half human, Pony has been seen attempting to obtain the bat on numerous occasions, but as the bat is kept in the Garages storage, Pony is always discovered before being able to touch the magical bat. When asked why Enjoyable won't simply let Pony hold the bat for a moment, Enjoyable was quoted saying, "I don't think the world is ready for Magical Summers Pony quite yet." The rest of the team nodded in agreement.

Like any member of the Garages, Summers Pony is an important member of the band. Pony plays the harmonica via a special rig strapped to their neck as well as a specialty DDR pad hooked up to a midi sampler. In their downtime they have been learning how to play the saxophone, but as they need to be lying on their back to do so, it's proven to have a bit of a learning curve. Pony hopes to some day master the song "Careless Whisper" by George Michael.

After practicing for months in Season 9, Pony surprised everyone by performing a saxophone solo during game 91 against the Charleston Shoe Thieves and being the first of the Garages to party. This performance was so great, even star pitcher Betsy Trombone was distracted by it, causing her to give up a walk. Pony is now an official member of the Skarages, much to the delight of Oliver Mueller.

Summers Pony is the focus of the following song:

Additionally, Summers Pony is mentioned in the following song: