The Public Transclawtation System refers to the complex system of public transportation services available in the City of Blaltimore.

The system is complex in large part due to the banning of cars and other motor vehicles because of the numerous baby crabs they ran over each year. While some people in favor of keeping motor vehicles pointed out that many humans were also crushed, the loss of crab life was considered too high a price to pay. The reduction in pollution was also considered as a positive and since crabs are capable swimmers it also allowed for easy movement around the parts of the city submerged during the great Blaseball-Glolf Clonflict.

The Train Crustation Service is the most popular and well funded department of the Transclawtation System, and is fast, reliable, affordable, and only comes with a minor risk of being devoured, a fact greatly appreciated by Non-Blaltimore Natives. A system of Eight Rails holds a Train Crustacean in place while it uses its two pincers to pull the universe towards itself, moving up to several hundred passengers a great distance at unholy speeds.

First Class carriages employ dark eldritch rituals, banned by the gods before the beginning of time, to have their passengers arrive in style, and the resulting tearing in the fabric of the universe is described as quite beautiful and to leave a faint smell of Blaseball in the air.

Almost as popular as the Train Crustation Service, the Bustacean Department and it's numerous Bustaceans serve as a slower but more widespread service. Almost every part of Blaltimore can be reached by Bustacean although some of the Bustaceans lack waterproofing due to budget cuts, which can be a problem to some residents travelling through submerged areas as most humans require oxygen to breathe. The Blaltimore City Council is currently running a city wide study to determine if this is in fact true and the results are expected to be presented sometime within the next eighty years.

Half Crab, Half Machine, Half Eldritch Abomination, also known as a Clawter Taxi.

Clawter Taxi's are almost exclusively used in the section of Blaltimore submerged in water, psuedo-water, and/or Protoplasm. While technically capable of operating on land, the cost to human sanity has resulted in the City of Blaltimore punishing anyone caught with an active Clawter Taxi out of the water to watching a beloved book be turned into a movie. No repeat offenses have occurred to date. Newly spawned/constructed/summoned Clawter Taxi's are highly territorial and will often engage in excessive pincer waving upon encountering another Clawter Taxi, a behaviour which continues until age two. 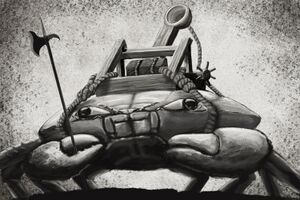 A Crabapult hard at work

The newest and most experimental of Blaltimores public transport services, The Clawtal Network utilises Nth-Dimensional Hyperportals to transport "people" to their desired destination "Safely." While still technically in the trial stage, now that 95% of all biomass arrives at the mostly correct destination, in mostly correct places, a full opening is expected within weeks.

Due to a clerical error during the construction process the Clawtal above Kent island is only reachable by Crabapult. It has been suggested by some residents that maybe the fortified walls around the Clawtal could be removed but so far the Crabapult Owners Association has refused to remove the 50ft reality warping fence.