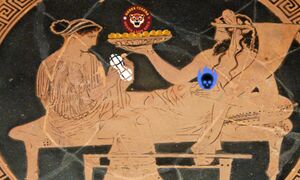 Persephone strikes a deal with Hades to be Queen of the Underworld on two conditions: That she is the legal owner of the Hades Tigers, and that the Spring happens during the Off-Season.

Persephone is the goddess of spring, queen of the underworld, and owner of the Hades Tigers. She spends each Blaseball season in the underworld performing her duties as team owner, returning to the mortal world during the off-season to perform her duty as the divine embodiment of spring.

It's commonly believed that Persephone was kidnapped and brought to the underworld by Hades. According to Hades, it was in actuality an intentional PR stunt planned by the two of them ahead of time to boost name recognition.

Like most divine beings (her husband being a notable exception) Persephone is a mysterious entity who prefers to avoid directly interacting with mortals. The only known depictions and records of her existence are mythological and of dubious accuracy. Other than manager Fearful Symmetry, no Hades Tigers player or staff member has ever interacted with her directly.

The souls of the damned have taken to referring to Jessica Telephone as "Jessica Persephone". This, combined with her appearance matching the most common mythological depictions of Persephone, has raised much speculation. The topic is particularly popular among Tartarus tabloids. It has been suggested that "Persephone" is not actually a divine being at all, but a myth based on Jessica herself that Hades perpetuates in order to evade taxes. Alternative theories connecting the two include a scandalous relationship, that Persephone is actually a future Jessica who ascended to divinity ensuring her own past Blaseball career, that Jessica is actually an alter ego used by Persephone to interact with the mortal world in secret, or that it's just a coincidence that they look alike.