Rumor / Community Lore
This article contains lore created collaboratively by the Blaseball community. It is just one of many Rumors that we've found in the Interdimensional Rumor Mill. You can find more Rumors about Pedro Davids at their Rumor Registry.

Pedro Davids played blaseball as a child in the Mexican blittle leagues for years before giving up on his chances at big league play to “do the right thing” and buckling down to serious work. Hailing from from Puerto Peñasco at the Northern end of the Gulf of California, he studied at the University of Veracruz and his thesis on the effects of ecotourism on whale shark and sea turtle populations caused unrest in the department. He was eventually forced to significantly rewrite it while working off hours at the Tortugranja on Isla Mujeres to cover his bills.

He heard about the new league opening up in the States and realized that this would be his last and only chance to play in the big leagues. Taking everything he owned and throwing it into an old rented trailer, he drove his old Ford north all the way to Matamorros when his drive shaft broke on a pothole. So close to his goal but held back by cruel fate once again, with a mighty cry he lifted up the trailer on his own shoulders and pulled it bodily across the border before passing out along the coastline south of Galveston, where tiny claws bore him into the sea, eventually to emerge as a lineup player for the Baltimore Crabs.

While it is not well known, Davids has held a quiet discontentment with the reaction of fans to some of the more well known players on the Baltimore Crabs, most notably Nagomi McDaniel for getting much of the credit for protecting or saving the team regardless of the fact that Davids has been there since the return of blaseball, and made significant contributions to the team himself. While he strives not to let this affect his relationship with Nagomi he and teammate Adalberto Tosser have an annual tradition of getting together to complain about being underappreciated on the team.

When he briefly became unstable in season 7 he felt a morbid pride since the players that were typically targeted were the crux of the team. He remarked privately that "At least this story is about me, even if it is a tragedy".

After a moving to Baltimore and joining the Crabs Davids began keeping a written correspondence with his family back in Puerto Peñasco. They are reportedly just "not that into sports" so Davids makes a point of keeping them abreast of the latest developments in the ILB, though usually focuses on his own accomplishments, and leaves out the accomplishments of certain other star players. In an excerpt of one of his letters to Valentine Games he admits that, "I know it's not the whole truth, and they can watch the games from where they are, but who doesn't brag a little when writing home, Val?"

While in the Big Leagues, Davids outgrew his current camper. Rather than risk getting ingrown into this one he decided to perform a complicated ritual using all the resources available to the Crabs to try and rework his own carcinization.

While it is unclear whether something went wrong with the ritual or the Olde One couldn't reach the Big Leagues effectively, the result was unsatisfactory. Unwilling to give up, Davids took matters into his own hands and began using his understanding of Carcinization as well as parts from former teammate Axel Trololol and his RV to create a new more compact and more customizable appliance to carry around. The result was a dense crab-like creature that could clamp onto his back, and expand into a wing-like shape.

When asked about how he felt about making use of Axel's remains in such a way Davids commented that "Evil is a label applied by the world to behaviors society rejects. They call us evil here for killing our god. Let them say what they say about us. I don't let it affect me and my decisions. I'm taking control of my own destiny". This was reportedly followed by yet another attempt by Evelton McBlase II to recruit Davids as their sidekick. 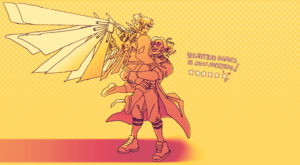 Pedro and Val being reunited after the Crabs return in season 12. Art by @glassgoblin

When the Crabs returned to the ILB after their long hiatus, Davids was eager to put to work the many things he had planned while away with the Crabs. He took advantage of the Crab’s late return to spend a considerable amount of time in Season 12’s lateseason with Valentine Games, and while it’s not common knowledge exactly what was shared between them, it seemed that many things that had been long left unsaid were finally put to words. The two of them stayed in close contact even as the Crabs began their season 13 run for the championship, where Davids and Valentine met in the finals.

It was soon after that however that the Crabs ran into troubling times, with theme captain Kennedy Loser becoming haunted, and the loss of many of their team members across season 15. This left Davids to take on a leadership role alongside Silvaire Roadhouse and the newly traded Parker Meng. Even with his time occupied trying to keep the team together, he still exchanged letters frequently with Valentine, and even with increased frequency as the league learned the fate of legendary players in the league, and Valentine’s prominence on the idol board.

In the Season 19 MVP call, Valentine Games was made legendary and removed from the ILB. Despite the two of them attempting to make peace with it in advance, Davids was still devastated by the loss, and as replicas of Valentine Games began to appear in the league, Davids found it difficult to continue to play, and was shadowed in the Season 20 elections.

David’s solitude was not to last however, as in Season 22 Day 19, former Baltimore Crab and captain Brock Forbes was incinerated by a rogue umpire. As sharply as Davids felt this loss, he quickly took advantage of his status in the shadows to be at the side of his old friend, and husband of Forbes, Adalberto Tosser , who had recently been traded to the Boston Flowers. Long gone were the days when the two of them could complain about their team and the lack of recognition for their hard work, with those worries replaced with a fraying team and the losses of their partners, but the two of them found solace in their old traditions. Davids also left strict instructions for Crabs rookie Zeruel Kramer not to let the team get shut out at home, as that would activate the newly Ratified Voicemail and require Davids to return to active play. Kramer did zer best and managed to stay in play until Day 96, giving Davids plenty of time to steady his friend before returning to Baltimore.

In an attempt to help Davids keep his mind off of the splort, Finn James recruited several crabs for a interstate road trip where they could meet up with old players for the Baltimore Crabs. Alongside Avila Guzman, Montgomery Bullock, and Bevan Underbuck, The five of them took Davids’ RV to Boston, Ohio, and anywhere else they could manage before the season started. While Davids appreciated the trip, by the time they made it back to Baltimore Davids was able to spend his time on an old hobby - tuning up his RV after a long trip. Finding himself a little more centered, Davids turned his attention back to the team, balancing the bad days with the good ones, whether that meant a day of successfully keeping the knives away from Enid Marlow at “knife hitting practice” practice, or letting Kennedy Loser stop by his place with coffee so they could reminisce.

Towards the Event Horizon

The moment the Vault appeared in the team’s site Pedro Davids knew what he had to do. Before that however, he, Kennedy Loser, and Finn James discussed what the best choice for the team was. While they knew the Hall held many old friends, the Vault represented safety, and of course Valentine Games (and Tillman Henderson). After terse discussion and disagreement, the three of them agreed that the team needed to go to the Horizon, off to the place that held them at the very start of the season. Davids however, knew that once the team had arrived safely, he would be departing for the Vault to reunite with Games.

As the team worked towards reaching the Black Hole (Black Hole) Davids approached Zeruel Kramer about building a ship to reach the Vault. Plagued by zir own fears of the threat of being nullified or forgotten, Kramer signed onto the project, though ze did express that ze wasn’t sure Games would appreciate the attempt as, even though ze never met Games, ze “knew her through her art - the idea of travel and becoming something new was essential, and stillness brought only entropy”. Davids declined to invite Kramer to continue, but ze showed up to help until the day that the Pies were swallowed by the Black Hole, at which point ze reworked their ship to be a single passenger vessel so it could be completed on time, trusting that even if the rest of the team were nullified, at least Davids could remember them all for zir.

The day the Black Hold began to swallow the Crabs, Davids departed from the top of the Crabitat, disappearing into the distance as the Crabs were Nullified. In the end he made it, arriving just as the Black Hole expanded to cover the universe. Davids however did not belong in the vault, and whether that is a punishment or a mercy, those were his last thoughts as he saw his goal fading before him and the void go bright and redshift into blood as he fell forever towards his team - a falling star returning to the sky where it all began.