Know more about the Dale's fan culture? Add it below!

Dale fans are known as la familia. Like the team's players, the fans are less concerned with the team's record than in having a great time together. Dale fans value each other and their team regardless of arbitrary definitions of "success," instead embracing each being's inherent worth. The team's chant, ¡Dale!, is used just as often to remind fellow fans of what's truly important after another season at the bottom of the Wild League as it is to cheer on the players.

The Dale have one of the smallest fanbases in the ILB[1], with some estimates as low as 12-14 people. Despite the fact that the team's ballpark and frequent parties are well-attended, even crowded, no one has been able to prove that more than 14 distinct people (not counting players, staff, family members, and the Press, who take an oath to remain objective) were ever in attendance. ILB Census results have estimated as many as 484 Dale fans, but groups including MIBR have questioned the validity of this data on the grounds that "if they were fans, we'd know about them."[2] Even the highest estimates are still about one-fifth the size of the largest ILB fanbases, such as the Hellmouth Sunbeams and Seattle Garages.

Dale fans are known for being enthusiastic and devoted despite their small numbers and the team's inconsistent performance. The low number of fans has even itself become part of the fan culture, with fans identifying themselves as "one of the Miami Dale's 13 fans"[3] or increasing the number by one when they meet another fan. Reports vary as to whether the "13 fans" number is a true estimate, a joke, or an expression of the belief that there are between 12 and 14 archetypal Dale Fans who each influence many members of the fanbase. Rumors of such Dale Fan "spirits" often include a specific list of fans, such as: the evil fan, the loving fan, the mischievous fan, the old gumby fan, the getting real fan, the randy Randy fan, the Dragon/Fighting type fan, the (grand)parent fan, the "party rock is in the house" fan, the "party rockers in the house" fan, the Reblecca Black stan fan, the drama-loving fan, Beth, the lesbian sunset jersey fan, and the Ticker. While there is not a name for this belief system, it has gained traction, and many fans will refer to "possession" by one of the Fans as an indicator of their mood, desires, and/or current state of being.

Between their small size and low interest in "strats" and betting compared to many ILB teams, the Dale fanbase's voting power is notoriously low. However, in the Season β4 Election, the Dale won the Evil Wind Spirits blessing with a rounded 0% of the vote, upsetting the highest bidder, the New York Millennials, who had 46% of the vote. Following the announcement of the results, (at the time) Millennials player Schneider Bendie tweeted "wow it really happened again huh. one [sic] person in florida [sic] typed "vote, wimdy?" into aol dot com [sic] and @blaseball said 'well you gotta hand it to them, they make a compelling case.'" The tweet has since been taken down.[5] The Dale immediately latched on to both the phrasing and the glimmer of hope given by their unlikely upset. No longer referring to the specific blessing, "wimd" was repurposed by the fanbase to mean a specific kind of luck: a possible but unlikely chance outcome in the Dale's favor.
The fanbase, newly energized by receiving a blessing for the first time, reorganized their voting strategy around the concept, and the linguistic naturalization of the term soon followed. A fan could simultaneously emphasize the unlikeliness of a particular outcome and its ultimate possibleness with a single term. One might put a small number of votes into an unlikely blessing "for a wimdy," express optimism about an outcome by saying one "feels the wimd blowing," or remind a discouraged friend that "we could wimdy!" While the odds were not quite as long, the team's faith in "wimdies" was rewarded in the Season β7 Election, during which they received the Iffey Jr. blessing with 2% of the vote and the Closed Circuit blessing with 3% of the vote.
The term is now widely used throughout the entire ILB, possibly due to the prevalence of unlikely occurrences in Blaseball more broadly[citation needed].

Several hundred people, including an unknown number of Dale fans, live communally in a South Beach high rise that was abandoned by wealthy owners post-Hellmouth-opening. This started after a July 31st, XX20 game in which a wealthy Dale fan who lived in the building drunkenly invited every member in his section to an afterparty, who then began to occupy the other vacant apartments in the building after every door on the 30th floor was busted down in the festivities. Over time, the entire building became free housing for Miami locals who needed it. In the absence of eviction notices or other legal action from the owners, the community was found to have adverse possession of the property (small piles of ashes in various mailboxes were found to be unrelated).

This communal living situation has been praised as a potential model by local organizations usually unaffiliated with splorts like Food Not Bombs.

A flock of flamingos roams the grounds. In August XX20 they learned to use the elevators. It is highly recommended that you feed the flamingos. They will not stop chasing you until you do. Residents are advised not use the hot tub if it is currently occupied by flamingos, but a community effort is underway to litter box train them.

Dale fans are known for their love of chants and repeating phrases in support of their team/players. Conversations are frequently derailed by this impulse, with discussions ending in long, unbroken chains of "dale" or similar. 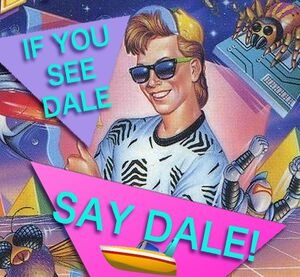 Dale fans are known to continue cheering for players who have changed teams and/or died.