Stub
This article is a stub. You can help by expanding it with updated information or additional lore. See the Style Guide for more on writing articles. 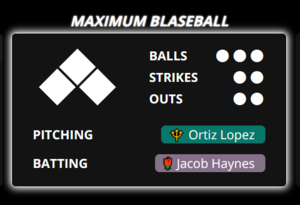 An occurrence of Maximum Blaseball

Maximum Blaseball occurs when a batter has a full count with bases loaded. This typically requires three strikes, three balls, and two outs, but will be adjusted to account for fewer or additional balls, strikes, and/or outs a player may have from any Modifications. It lasts as long as these conditions are fulfilled.

While the term "Maximum Blaseball" began being used by fans to describe the occurrence during the Discipline Era,[1] it wasn't until the site returned during Expansion that it had been updated to actually display a box surrounding instances of Maximum Blaseball.