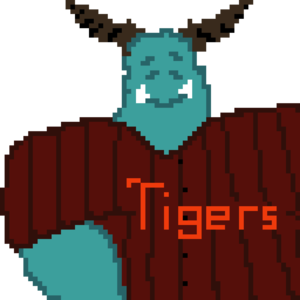 Kick Rocks, #1 Coach of the Hades Tiger's. By Clover (@beatnikbedlam)

Kick Rocks is the pitching coach and ritual magic expert of the Hades Tigers. Kick Rocks claims to be one of the greatest Blaseball pitchers to ever live. No one has bothered to confirm if this is true or not. Kick Rocks knows nothing but Blaseball, and has never been observed doing or talking about anything else.

Kick Rocks makes many important decisions for the Tigers beyond pitching coach duties, seemingly at random to outside observers -- but these decisions always seem to work out, and look genius in hindsight. Seeing this, the rest of the Tigers mostly take what was said on faith, treating Kick Rocks as almost an oracle; Kick Rocks denies having any prescient abilities, simply saying "Kick Rocks get a lot of good hunches." Many Tigers players, including Yazmin Mason and Randy Callisto, have taken to approaching Kick Rocks for personal advice as well.