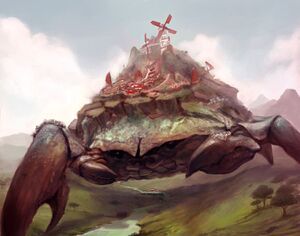 In the first age, in the first battle, when the shadows first lengthened, and the blaseball gods first arose, one stood. Drowned by the waters of Armageddon, her soul blistered by the fires of Hell and tainted beyond ascension, she chose the path of perpetual torment. In her ravenous hatred she found no peace; and with boiling blood she scoured the Blaseball Plains seeking vengeance against the Blaseball gods who had wronged her. She wore the chitin of the Mother Crab, and those that tasted the bite of her snippers named her... the Crabaclysm.
Like her crustacean relative the lobster, the Crabaclysm is biologically immortal and only grows larger and stronger with age. However, while the lifespan of lobsters is bounded by the increasing difficulty of moulting as the amount of shell they must shed increases, leading to death by exhaustion or infection, the Crabaclysm has shown no signs of ever succumbing to such a fate. Her titanic scale is therefore an indicator of equally titanic age and power. Scientists studying crustacean growth rates estimate that she emerged in the late Crustaceous period, which would indicate that the crab is at least 160 million years old at this time.

The Crabaclysm shines with an unholy crustacean aura, which to the mortal mind appears red. Standing at 2000 feet tall, and 60,000 square feet in shell area the Crabaclysm is an awe inspiring sight to behold. The ten titanic appendages of the crab are each larger than many skyscrapers and are scarred and pitted by the wounds of ancient war. When stationary the Crabaclysm could easily be mistaken for a mountain, albeit an evil one.