From Blaseball Wiki
Community History
This page documents the Blaseball community, Discord culture, and the organizations, resources, and artwork created by its fans.

Crabs LLC was a fictional corporate office roleplay enacted by fans of the Baltimore Crabs via discord and twitter in Season 11 that spawned an online ARG project.

The End of an Era

Crabs LLC is a multiplatform bit that was started by some fans of the Baltimore Crabs at the beginning of Season 11. It all began in the grim atmosphere of post-ascension, when Crabs fans were still sore from their immediate loss in Day X, losing three members of their team from the People's Champions blessing in the election, and the uncertain future of the Crabs themselves. That fateful Monday morning on the first day of Season 11 Josh, who runs the Crabs twitter account, said the following;

I personally think it would be really funny if the Baltimore Crabs reformed as a C corp Corporation, Baltimore Crabs LLC. And we roleplayed era-themed capitalism for a season. Then maybe people unionize or something.

What followed was a few jokes about the idea of Forrest Best trying to sit in an office chair with all its crab legs, Tot Fox in a tiny suit as the IT department (It’s Tot!), and Luis Acevedo being turned into an unruly projector. It very quickly expanded. Josh rebranded the twitter account - the ILB was aghast. Claws Up? No, Stocks up!

This was exactly the kind of thing that a server full of disillusioned fans needed. A started a channel for RPing office workers, eventually turning into a thread of in-character emails, a water cooler, and an out of character chat. Two emojis were created just to react to everything with an enthusiastic “Noted!”. Josh started simping for the coin for some reason (still not clear on that one). The Crabs became ever cheerful heels of blaseball by rolling out what the league hated most: corporate branding and unfettered capitalism.

What was Crabs LLC?

In the Crabitat discord server, which hosted three channels dedicated to office roleplay and quickly spiraled into a strange office building in inside the tower of Crabylon. This also introduced the character of Harmony H. Henderson, who was quickly incorporated into other parts of Crabs LLC.

On the Crab's team twitter, the account rebranded itself as Crabs LLC inviting fans everywhere to join up as they were now hiring. They continued to post corporate slogans and seminars throughout Crabs LLC's run.

And finally one of the most impressive outcomes of the bit, Crabs LLC spawned the Crabs ARG; 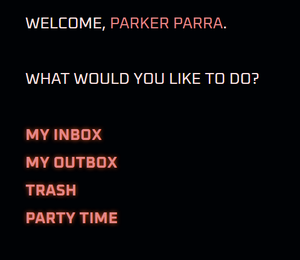 Back in the early days of blaseball, a Crabs fan named Leo created a website mostly set up as a joke and linking into a few resources to track votes and access the latest plans in idol swapping and betting patterns, as well as a link to the Crabitat itself. After an incident of tampering with the voting spreadsheet it was locked down with a password. The site was still accessible, and you could access the Crabitat from it, but if you attempted to access the spreadsheet it would prompt you for the password.

Shortly after Crabs LLC went live, there was a visitor to the Crabitat. A slightly confused Shoe Thief who thought that this site and it's password were a part of some Crabs based ARG. After a little digging and some reassurance from regulars, they did get it straightened out but then, as Crabs are often known to do, a few Crabs committed to the bit.

Within the server this became known as A Really Good Crab. A team of crabs enthusiastically got to work setting up a mailing list, a fake email browser and account, and commandeering Josh’s existing Crabs LLC LinkedIn page for the project. While they did eventually die off, it was still a memorable and fun experience where players could hunt for clues on this very wiki to hack into an email account of one of the employees/players and examine their email account for clues to the next inbox.

Users were able to log in to the account of Parker Parra, with completed inboxes for Adalberto Tosser and Tot Fox that were never released - with each account giving clues to unlock the next one.

Artifacts of the ARG still remain, including:

The End of Crabs LLC

As the bit ran it's course, the Crabs eventually decided it was time to send off Crabs LLC in the most appropriate way possible - more elaborate office roleplay. For the team twitter, the account was was overtaken by a union and was shut down (though continued to simp for the Coin for most of the Expansion Era, once again - unclear on that one). For the discord server, the company was dissolved (possibly literally) and one final email chain was started for people to send their thoughts in.

In the end Crabs LLC was a community coming together to keep the team alive in a time of uncertainty, and it left behind a strange corporate legacy, a very cool set of puzzles, and at least a few memorable emojis that the crabs still use to this day.