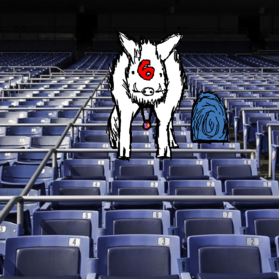 Big 6 by Dee on discord

Big 6 (also known as "Big 6", "Pig 6", or "Elder Pig"), is a mascot for the Yellowstone Magic. They are a large white boar that guards the "Time Portal" that drifts throughout the park. Big 6 is known to be friendly, but zealous in their duties, and impervious to almost all forms of magic.

It is due to their efforts that the "Time Portal" remains largely un-observed by park-goers, fans, and National Park Service staff, with its exact nature only theorized by remote observation.

According to research by park rangers, Big 6 is an omnivore, with a diet including root vegetables, fish, car tires, iron supplements, and memories.

Big 6 is associated with five other porcines, appropriately numbered 1 through 5. The pigs are believed to be connected to Big 6 and temporal magic in some way, but attempts to examine this relationship more thoroughly have been stymied by noncooperation.

Several of the pigs associated with Big 6 are currently held in a small pen near one of the many Park Service Stations throughout the park. The Park Service states,

"The containment of all anomalous numbered pigs is for the health of the Yellowstone ecosystem, the pigs themselves, and to facilitate study by both the Park Service and the Council of Wizards."

Pig 4 (also known as "Crime Pig") seems imbued with an instinctual disdain for authority, power, and personal property. While it lacks Big 6's noted magic resistant hide, pig 4 nevertheless seems able to resist the call of druidic magics, facilitating its continued evasion of the Park Service. It has been observed stealing from park guests on several occasions.