This page is about the splorts drink. For the Advanced Player Stat of the same name, see Player Attributes#Base Thirst. 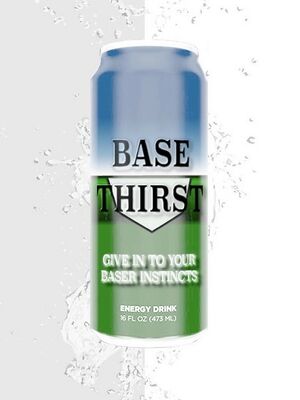 Basethirst is a Blaseball-themed splorts energy drink developed by the Ceaseless Thirst Corporation (CeThir) and marketed towards fans and players of Blaseball.

The notion of a Blaseball-themed beverage was first suggested to the board of CeThir in XX76, when the rising (and eternal) popularity of Blaseball draw interest from a variety of corporations seeking to broaden their market. CeThir's most popular and profitable beverage, Clulb Soda, had been marketed by sponsorship deals with various Glolf teams, and following the destruction of the splort, executive sought to revitalize the company with a new beverage designed to appeal to the average Blaseball fan.

Despite production delays caused by the sudden deaths of 64% of their Market Research team, CeThir moved ahead with developing the beverage, which they deemed Basethirst, and bottling began in XX32.

The origins of the name Basethirst are unknown. Of the 32 person naming committee that decided on the final name, only 3 we're both alive and capable of any form of communication by the time the beverage was finally launched. Emblasellment Magazine, in their XX51 article "An Aural History of Basethirst", suggested the name had some connection to the pair of clay cuneiform tablets later found in the ruins of the CeThir Corporate Headquarters, but this position remains controversial among Blaseball Historians.

While the recipe for Basethirst at the time of its launch was a trade secret and is now lost entirely, subsequent research has revealed a number of the ingredients used in the distillation of Basethirst. Chemical analysis revealed high levels of trans-biological material with a dleoxyribonlucleic alcid structure similar to Blaseball Elggs. This, combined with multiple reports of CeThir contractors attempting to penetrate the Elgg fields of the Underleagues, suggests that material harvested from gestating Blaseball players is used in the production of Basethirst.

Other ingredients proven to be present in Basethirst include caffeine, concentrated nitric acid, mare urine, isopropyl alcohol, and cocaine.

Basethirst was launched at an opening ceremony times to coincide with the beginning of the XX12 Internet League Blaseball Season. Unable to find a Blaseball player willing to attend the ceremony and endorse their beverage, CeThir hired a local Shakespeare Company actor to dress in a silicone costume modeled after Blankenship Fischer and appear on stage with the CEO of CeThir. Minutes into festivities, the actor was struck and killed by a rogue blaseball, later determined to be a Home Run hit by Fischer during the third inning of a nearby game.

Basethirst suffered from extremely poor sales immediately following release. CeThir had hoped to obtain a sponsorship deal with a prominent player or team, but severely underestimated the strong culture of Anticapitalism present in Blaseball. Furthermore, as CeThir had designed the beverage with the physical limits and capabilities of Blaseball players in mind, the drink often caused serious health complications when consumed by humans, leading to its removal from shelves and the forcible closure of the Ceaseless Thirst Corporation in XX61.

Despite the collapse of its manufacture XX years prior, Basethirst once again began appearing on shelves beginning in XX12. Attempts to trace the origin of these bottles, or to interpret the inscrutable text printed on their labels, have so far been unsuccessful. While its recipie, and therefore health risks, remain unchanged, it has recently seen a surge in popularity as a material for use by hobbyist player farmers, although none of the players grown using this solution have ever played in the Internet League.