COMMUNITY REPORTS
The remainder of this article contains lore created collaboratively by the Blaseball community.
Not to be confused with Bowyeurism. 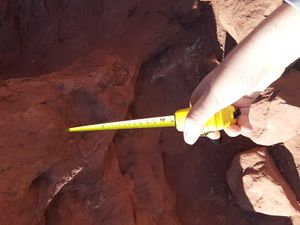 Archery is the art, splort, or practice of being around arches. The premier location for practicing traditional archery was Arches National Plark, before the opening of the Hellmouth.

Contemporary archery is practiced in an archery range.

Historically, archery was not a splort but a skill - for early people it was used as a method of navigation (using natural arches as landmarks), or as a way to avoid being outside (when placing oneself inside a building whose roof is being held up by ███-made arches).

Modern usage shifted from the second definition, and archery now refers almost-exclusively to being around natural arches. Following the cultural and technological evolution of more sophisticated navigation techniques, arches became appreciated less as a way to place oneself in landscapes and more so for their rarity and inherent beauty.

Traditional archery is still practiced in many locations around the Immaterial Plane. The Hellmouth Anti-Tourism Board has many excellent recommendations for archers disappointed by the permanent closure of Arches National Plark:

Arches National Plark was considered one of the finest traditional archery locations in the Immaterial Plane, as it has the highest density of natural arches in the world. After the Forbidden Book was opened and the Hellmouth swallowed up a section of Moab, Utah, the arches within the Plark fell asleep. A local geosomnologist explained the phenomenon as follows:

Listen. I do not have the words to explain how we know they're sleeping. All we do know is those rocks were not sleeping before, but definitely are now. For the love of Sol, we are not, I repeat, not waking them up.

The development revitalized the practice of archery as a new pastime, albeit one routinely condemned by the Hellmouth Anti-Tourism Board and strictly the domain of Hellmouthians.

Contemporary archery requires archers to enter an archery range, which is the range at which noise above 1█ Decibels will wake an arch. An archery range's perimeter is usually well-marked by scattered █████████s. A number of Hellmouthians claim to practice archery as a form of meditation or stress relief, calling the experience "tranquil, if constantly life-threatening."

Contemporary archery is saidby whom? to be an organized splort, where archers may quantify their skill at archery based on time spent in the archery range and/or proximity to the arch itself. This also allows for a competitive element, where an archer may either compete against their own personal best or those achieved by other archers.

Information about competitive archery is strictly banned by the Anti-Tourism Board, including details about current top athletes in the splort. However, Nagomi Nava, Jayden Wright, and Moon Roomba are all believed to be veterans of the splort.